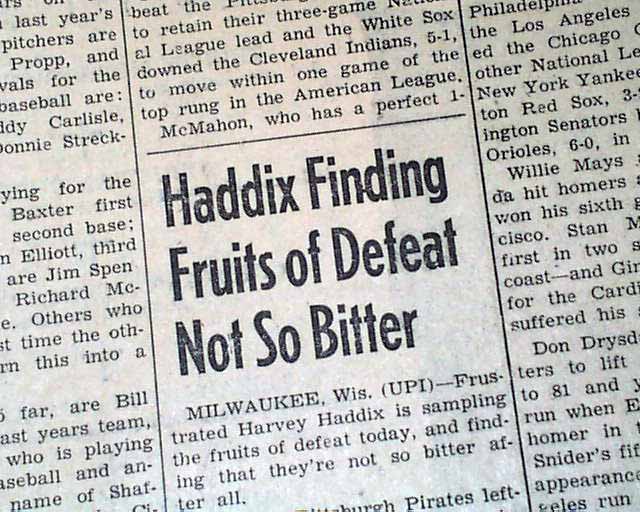 * Harvey Haddix - Pittsburgh Pirates
* 12 innings of perfect pitching for nothing

This 6 page newspaper has a one column headline on page 4: "Haddix Finding Fruits of Defeat Not So Bitter" Coverage of the famous perfect game being pitched by Haddix into the 13th inning and eventually losing the game 2-0.

Other news and various advertisements of the day throughout. A few small binding holes along spine, otherwise in good condition.

wikipedia notes: Haddix will always be remembered for taking a perfect game into the 13th inning of a game against the Milwaukee Braves on May 26, 1959. Haddix retired 36 consecutive batters in 12 innings essentially relying on two pitches: fastball and slider. However, his Pittsburgh teammates didn't score, as Braves pitcher Lew Burdette was also pitching a shutout.

After a fielding error by Don Hoak ended the perfect game in the bottom of the 13th, which brought Felix Mantilla to first base. Mantilla later advanced to second on a sacrifice bunt, which was followed by an intentional walk to Hank Aaron. Joe Adcock then hit a home run, ending the no hitter and the game. However, in the confusion, Aaron left the basepaths and was passed by Adcock for the second out and the Braves won 2-0. Eventually the hit was changed from a home run to a double by a ruling from National League president Warren Giles; instead of three runs on a home run, Adcock was out having passed Aaron, and only the first Braves run counted. The score was changed to 1-0, but the Pirates and Haddix still lost.

“I could have put a cup on either corner of the plate and hit it.”—Harvey Haddix

Haddix's 12 and 2/3-inning, one-hit complete game, against the team that had just represented the NL in the previous two World Series, is considered by many to be the best pitching performance in major league history.[1] Mazeroski later said of Haddix's dominance in the game, "Usually you have one or two great or spectacular defensive plays in these no-hitters. Not that night. It was the easiest game I ever played in."

After the game, Haddix received many letters of congratulations and support, as well as one from a Texas A&M fraternity which read, in its entirety on university stationary, "Dear Harvey, Tough shit." "It made me mad," recounted Haddix, "until I realized they were right. That's exactly what it was."

In 1991, Major League Baseball changed the definition of a no-hitter to "a game in which a pitcher or pitchers complete a game of nine innings or more without allowing a hit." Despite having thrown more perfect innings than anyone in a single game, Haddix game was taken off the list of perfect games. Haddix's response was "It's O.K. I know what I did."

In 1993, Milwaukee's Bob Buhl revealed that the Braves pitchers had been stealing the signs from Pittsburgh catcher Smoky Burgess, who was exposing his hand signals due to a high crouch. From their bullpen, Braves pitchers repeatedly repositioned a towel to signal for a fastball or a breaking ball, the only two pitches Haddix used in the game. Despite this assistance, the usually solid Milwaukee offense managed just the one hit. All but one Milwaukee hitter, Aaron, took the signals.