Home > Back to Search Results > Critical of action in the war... Fall of Charleston...
Click image to enlarge 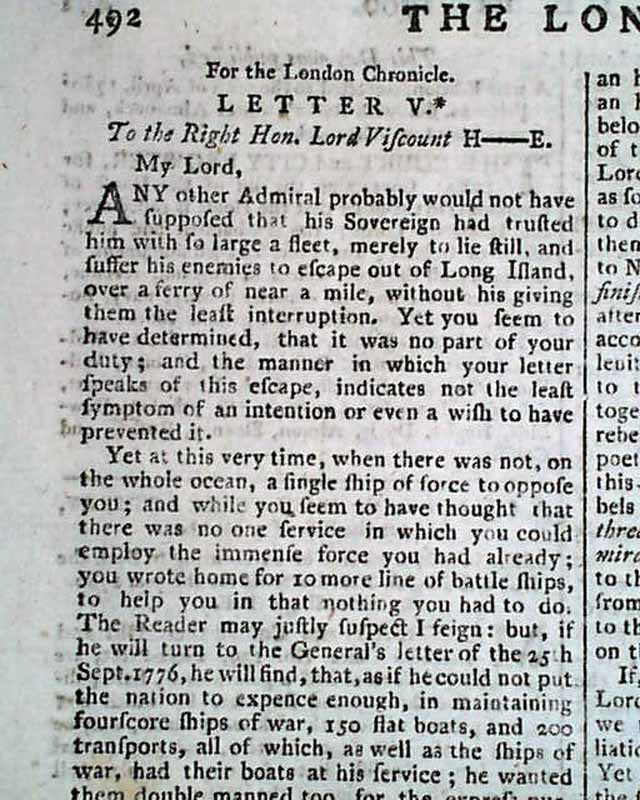 Critical of action in the war... Fall of Charleston...


THE LONDON CHRONICLE, England, May 23, 1780  Page 2 includes a report that: "...certainly various accounts in tow from very respectable quarters, all of which confirm Sir Henry Clinton's taking Charlestown [Charleston] by storm on the 7th of April after a great slaughter on both sides..." (see).
Fully 1 1/3 pages are taken up with "Letter V to the Right Hon. Lord Viscount Howe" which is quite critical of actions in America during the Revolutionary War. Some bits include: "...But Brooklyn Ferry was out of the view of your fleet, the rebels flight was in the night & you may plead ignorance of their intention...After the main part of the rebel army had crossed over to New York there was another part of them left on Governor's Island...These troops...you would have been doubly careful to secure after having suffered the others to escape..." and so much more (see for portions).
Another page has a bit from Paris noting: "Capt. [John] Paul Jones is very well received here...It is much wished that this intrepid mariner could be employed without giving offense to the national officers..." with more (see).
The back page includes: "...that General Clinton having disembarked with 6000 men on the coast of Carolina where he proposed to attempt the capture of Charlestown had received a check, that General Lincoln at the head of 9000 continental troops had attacked & forced him to retire to Savannah where the American general pursued him...at the same time General Washington was with an army of 14,000 men before New York, of which he flattered himself he should soon be master..." (see).
Eight pages, 8 1/2 by 11 inches, very nice, clean condition.