Home > Back to Search Results > News on the Revolutionary War...
Click image to enlarge 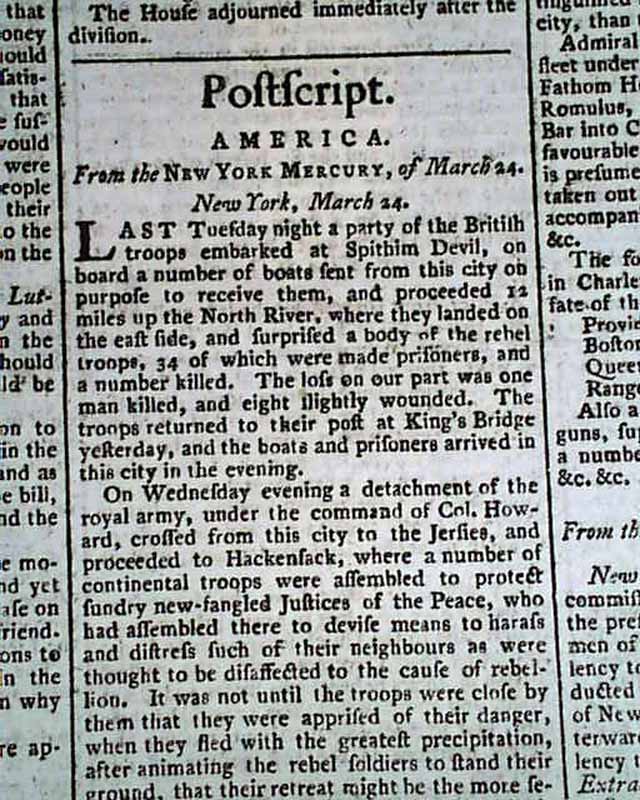 News on the Revolutionary War...

Near the back is a column headed "America" with news taking over half the page & which includes: "Last Tues. night a party of the British troops embarked...they landed on the east side & surprised a body of the rebel troops, 34 of which were made prisoners...troops returned to their post at King's Bridge yesterday..." and "...a detachment of the royal army under the command of Col. Howard crossed form this city [New York] to the Jersies & proceeded to Hackensack where a number of continental troops were assembled...It was not until the troops were close by them that they were apprised of their danger when they fled with the greatest precipitation after animating the rebel soldiers to stand their ground...after a number being killed they broke & made the best of their way home...that the rebels have cut the neck of land which joined Charlestown...also cut two canals cross-ways...in order that if any part catches fire during the siege it may be the more readily extinguished...soon after ...Sir Henry Clinton detached General Patterson with 2000 troops to penetrate into S. Carolina by way of Augusta..." with more (see for portions).
Another report with news "From the New York Royal Gazette" includes an "Extract of a Letter from a Gentleman in South Carolina dated at a Rebel House six Miles from Charlestown" which carries over to the back page (see), and this is followed by another letter from Charleston which includes: "We are in sight of the rebel fleet which is at anchor off Sullivan's Island..." with note of the ships involved (see), and closing with: "...Our army will have a battery of 40 pieces of cannon against Charlestown to-morrow."
Likely a few other war-related tidbits as well. Eight pages, 8 1/2 by 11 inches, some ink spotting on unrelated pages, otherwise nice condition.