Home > Back to Search Results > Naval events and more...
Click image to enlarge 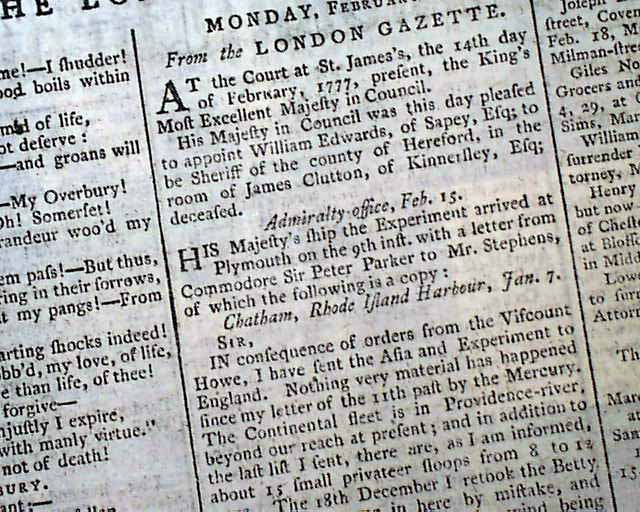 THE LONDON CHRONICLE, England, Feb. 18, 1777  Page 2 has a report from Commodare Peter Parker concerning his work in Rhode Island, including: "...the Continental fleet is in Providence River beyond our reach at present...the 18th December I retook the Betty transport..." with a list of the American ships taken & retaken by the British ships under command of Parker (see).
Page 3 has some discussion of a bill "...to empower his majesty to secure & detain persons charged with...high treason committed in North America or on the high seas or the crime of piracy." with this discussion taking over an entire column. Another page has an interesting letter concerning establishing colonies, with a bias towards never creating colonies in climates similar to the mother country.
The back page has more discussion on American affairs, including: "...lamented the present horrid situation of America...thought this war might have been prevented on the outset without any derogation of the honour, dignity or even interest of Great Britain...the sword was now drawn by America..." with more.
Eight pages, 8 1/2 by 11 inches, very nice, clean condition.