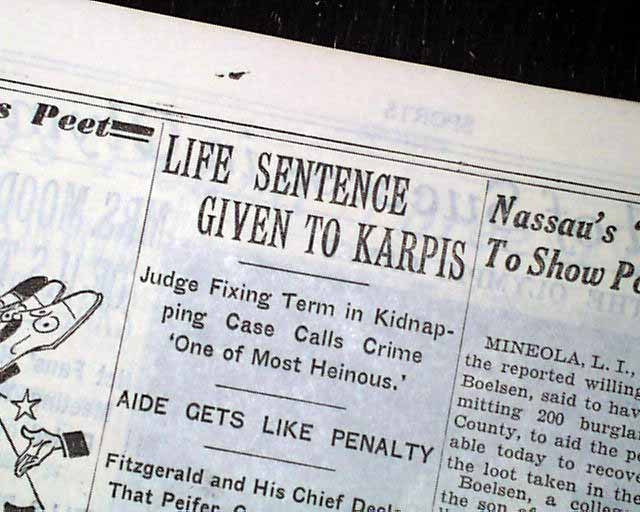 This 38 page newspaper has one column headlines on page that include: "LIFE SENTENCE GIVEN TO KARPIS", "Judge Fixing Term in Kidnapping Case Calls Crime 'One of Most Heinous'" and subheads that include: "U.S. Public Enemy No. 1 Seized Without Gunplay" and more with photos of Karpis and Hoover and more. See photos for 1st report coverage on former "public enemy no. 1" gangster, Alvin Karpis, receiving a life sentence for his crimes.

wikipedia notes: Alvin Francis "Creepy Karpis" Karpowicz (August 10, 1907 – August 26, 1979), born Alvin Karpowicz, nicknamed "Creepy" for his sinister smile, was a noted American criminal known for his alliance with the Barker gang in the 1930s. He was the last "public enemy" to be taken, a capture which elevated J. Edgar Hoover and the Federal Bureau of Investigation (FBI) to national prominence.