Home > Back to Search Results > Proclamations by British officers...
Click image to enlarge 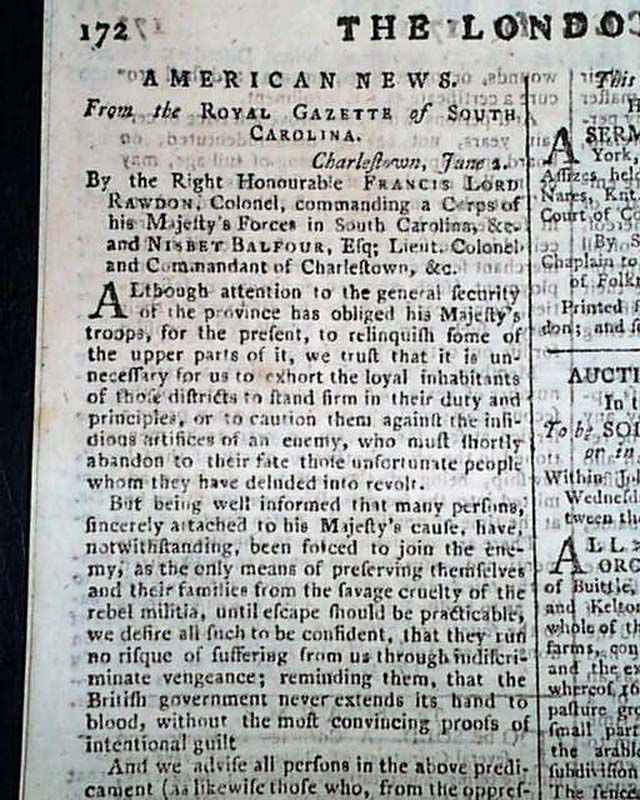 
THE LONDON CHRONICLE, England, Aug. 21, 1781  Much of the front page is taken up with naval reports from the Caribbean. Page 4 has a nice document from Charleston signed in type by both: Rawdon and N. Balfour, in which they note: "...attention to the general security of the province has obliged his Majesty's troops...to relinquish some of the upper parts of it...unnecessary for us to exhort the loyal inhabitants of those districts to stand firm in their duty & principles...that many persons sincerely attached to his Majesty's cause have...been forced to join the enemy as the only means of preserving themselves from the savage cruelty of the rebel militia..." with much more (see).
This is followed by a Proclamation signed by: H. Clinton in New York in which he notes: "...there are many persons residing among the rebels, as also numbers serving in the rebel army & militia who are withheld from joining their countrymen & friends now serving his Majesty...from an apprehension that they must not only enlist for life...I think proper to give notice...that they shall receive on their enlistment the sum of six guineas....entitled to the grant of land..." & more (see).
Eight pages, 8 1/2 by 11 inches, very nice condition.