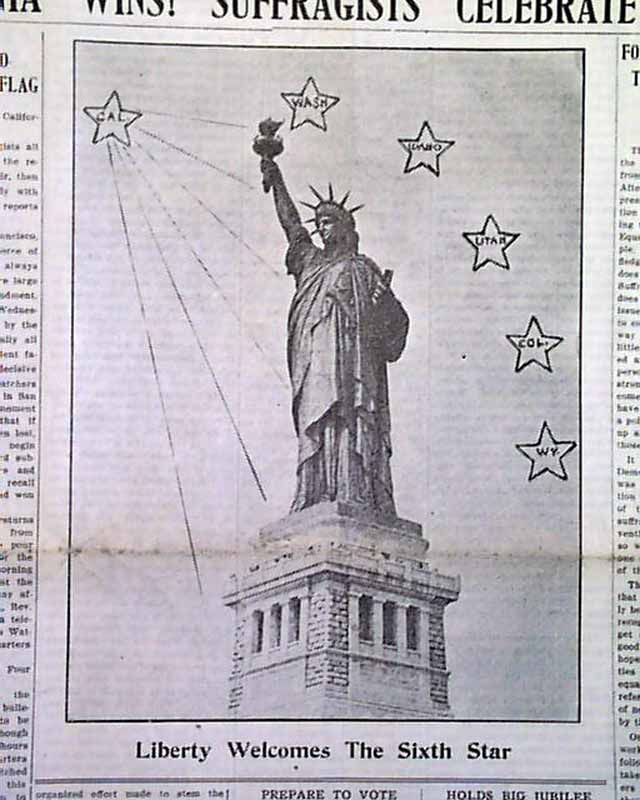 
THE WOMAN'S JOURNAL, Boston, Massachusetts, October 14, 1911  As stated under the masthead, this publication was the "Official Organ of the National American Woman Suffrage Association", being founded by Lucy Stone and Henry B. Blackwell and was "a weekly newspaper devoted to winning equal rights and especially to winning equal suffrage for women". The front page has a banner headline "CALIFORNIA WINS! SUFFRAGIST CELEBRATE VICTORY" with subhead "Another Star Now Added to Suffrage Flag" and features a photo of the Statue of Liberty with six stars which represent the states with "equal suffrage". The photo has a caption "Liberty Welcomes the Sixth Star".

Additional articles are: "Follows Candidates To Put question On Woman Suffrage"; "Yet She Cannot Vote - Single Handed, a Clever Woman Builds Up a Fine business, But She Has No Voice in Its Social Control"; "The Proposed Constitutional Amendments"; "Even Nuns Vote - Catholic Journal Sees No Reason Why Holiest Woman Should Not Exercise Franchise"; "What Kind Of Men Want Women to Voe and Why - Judge Ben B Lindsey". Other stories pertaining to the suffrage movement and advertisements are within.

This is complete 8 pages with several small binding holes along left spine, slight dirtiness at the centerfold, otherwise in good condition.