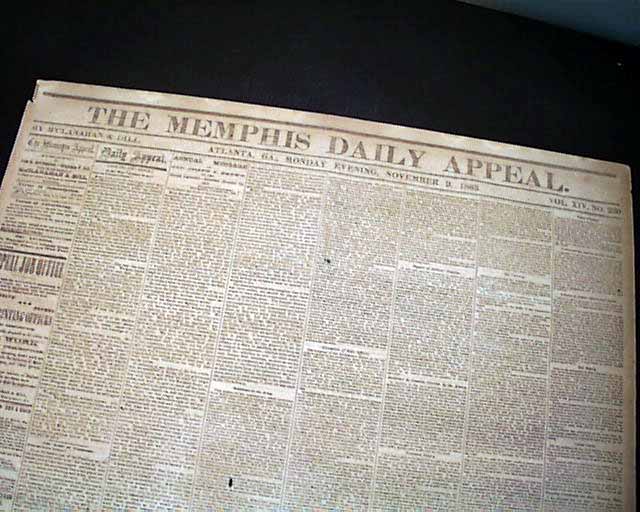 Item # 586631 THE MEMPHIS DAILY APPEAL, Atlanta, Georgia, 1863  If the title and city of publication seem to be in conflict, they are not. This newspaper had a fascinating history during the Civil War.
Memphis was a Confederate stronghold up through the Battle of Memphis on June 6, 1862, at which time the Yankees moved in and it became a Yankee city. The "Memphis Daily Appeal", dedicated to the Southern cause rallying both civilians & soldiers, it was the most important newspaper of the region, soon famously known as the "Moving Appeal."
On June 6, 1862, the presses and plates were loaded into a boxcar and moved to Grenada, Mississippi, where it stayed for a few months, until approaching Federal troops threatened again, forcing a move in November 1862 to Jackson, Mississippi, where it published until May 1863, when Federal troops again arrived. By this time, the Appeal had gained notoriety among Union forces as a rebel sympathizer while it remained on the run. The next stop was Meridian, Mississippi, from where, one issue and two days later, the wandering journalists moved on to Mobile, Alabama, then to Montgomery, and ultimately to Atlanta, the economic heart of the Confederacy. Publication from Atlanta began in June 1863 and continued through July 1864, when it returned to Montgomery, where it published from September 1864 to April 1865. Its final move was to Columbus, Georgia, where Federal forces finally caught up with it. It resumed publication following the war in Memphis on November 5, 1865. During just a four year period this newspaper published in nine different cities. (credit: Tennessee State Library & Archives)
This newspaper contains various Civil War reports from the period, logically much of it anti-North and pro-Confederate in stance. War-related reports are found on both pages, as are advertisements.
Complete as a single sheet newspaper, full folio size, a bit spine, and a very small worm hole near the center. Generally in very nice, clean condition.

Note: The issue shown is representative of the look and condition of what you will receive, but actual dates will vary within 1863.