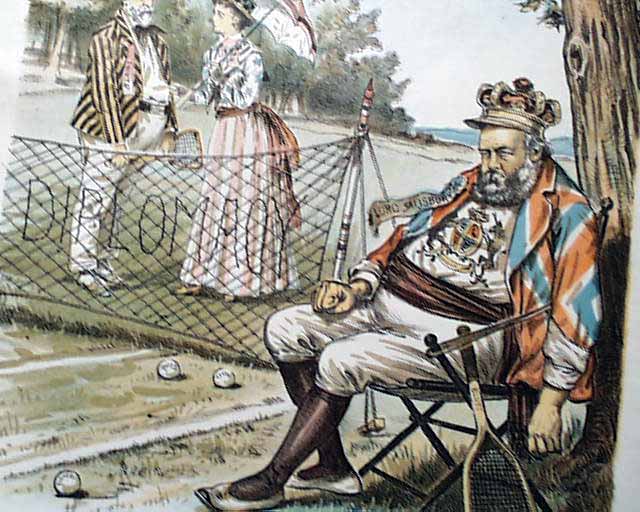 Judge magazine was founded in 1881 by a group of artists, headed by James Albert Wales, who left the staff of the popular comic weekly Puck. The magazine featured bold satire and good political drawing with chromolithographic front and back covers and center spread.
After a strong start, the magazine found itself struggling to compete with its very similar rival Puck. Puck finally expired in 1918, while Judge continued to thrive into the 1930's and beyond.
The double-page centerfold in this issue is tipped-in which makes it very nice for display, meaning no binding holes or stapes which are more typically found.
The color prints are very desired for their displayability. This issue has as its political cartoons:
front page: "Outplayed!" which has a tennis theme
double-page centerfold: "Mowing 'em Down!"
back page has 9 panels and is non-political: "Good Little Duncan, & His Day at the Office With Papa."
Complete in 16 pages, 13 1/4 by  10 1/4 inches, nice condition.