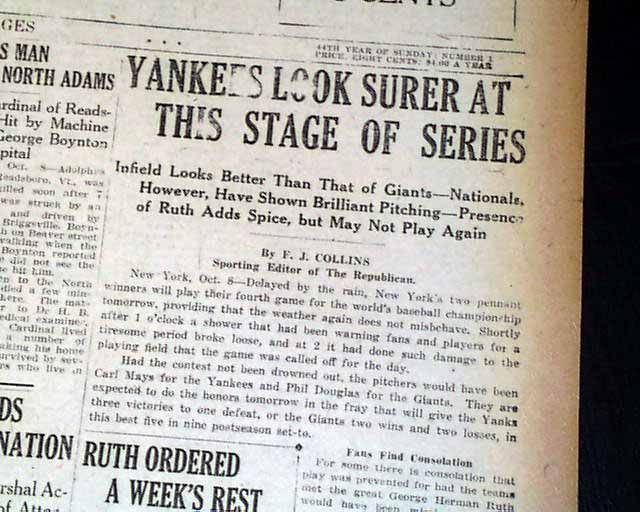 This 30+ page newspaper has a small and somewhat discrete one column heading on page 3 of the sport's section (inside): "Notre Dame Defeated" which gives a brief first report on Iowa Hawkeyes football team beating Knute Rockne'e Fighting Irish.

Wikipedia notes: The 1921 Hawkeye team was one of the nation’s best that year and one of the greatest in school history. The team, whose 11 starters were all native Iowans, finished with a perfect 7-0 record. Iowa defeated Notre Dame, 10-7, in their first ever meeting with the Irish; Notre Dame and Coach Knute Rockne had won 20 consecutive games. Iowa had a 5-0 record in Big Ten play and won its second Big Ten title.

Also much on the ongoing World Series which was also the 1st for the New York Yankees. Babe Ruth was the star on the team.

Other news, sports and advertisements of the day. A little margin chipping, otherwise good condition.