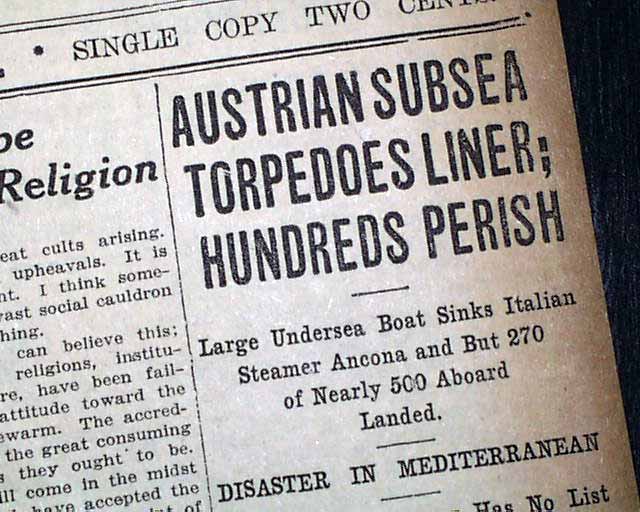 This 12 page newspaper has one column headlines on the front page that include: "AUSTRIAN SUBSEA TORPEDOES LINER; HUNDREDS PERISH", "Large Underseas Boat Sinks Italian Steamer Ancona and But 270 of Nearly 500 Aboard Landed", and more (see photos). 1st report coverage on the sinking of the SS Ancona by the German U-Boat U-38.

Other news, sports, and advertisements of the day are included. This issue has light browning with minor margin wear, but it is otherwise in good condition. It should be handled with care.

wikipedia notes: In November 1915 U-38 caused a diplomatic incident when she sank the Italian passenger liner Ancona off the coast of Tunisia, while sailing under the Austrian flag. The Ancona, bound from Messina to New York, was fully booked and over 200 lives were lost, including 9 Americans. Coming as it did 6 months after the sinking of the Lusitania off Ireland, the Ancona sinking added to a growing outrage in the US over unrestricted submarine warfare, and US Secretary of State Robert Lansing despatched a sternly-worded protest to Vienna.

After receiving no satisfactory response from Austro-Hungarian Foreign Minister Baron István Burián von Rajecz, in December 1915 the US demanded that the Habsburg government denounce the sinking and punish the U-boat commander responsible. Germany, then concerned to maintain American neutrality, advised Burián to accede to the US demands, and Vienna eventually agreed to pay an indemnity and assured Washington that the U-boat commander would be punished, although this was a meaningless promise since he was a German officer. Following the settlement of the affair, the Austro-Hungarian government requested that German submarines refrain from attacking passenger vessels while flying the Austrian flag.