Home > Back to Search Results > The death of Cap 'Pop' Anson...
Click image to enlarge 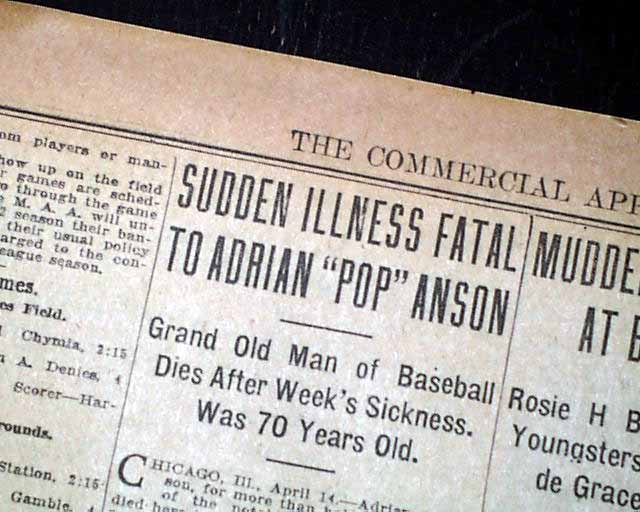 Other news of the day. Light browning with a little margin wear and chipping, otherwise good. Should be handled with care.

wikipedia notes: Adrian Constantine Anson (April 17, 1852 – April 14, 1922), known by the nicknames "Cap" (for "Captain") and "Pop", was a professional baseball player in the National Association and Major League Baseball. He played a record 27 consecutive seasons,[1] and was regarded as one of the greatest players of his era and one of the first superstars of the game.

Anson spent most of his career with the Chicago Cubs franchise (then known as the "White Stockings" and later the "Colts"), serving as the club's manager, first baseman and, later in his tenure, minority owner. He led the team to five National League pennants in the 1880s. Anson was one of baseball's first great hitters, and was the first to tally over 3,000 career hits.

His contemporary influence and prestige are regarded by historians as playing a major role in establishing the racial segregation in professional baseball that persisted until the late 1940s. On several occasions, Anson refused to take the field when the opposing roster included black players.

After retiring as a player and leaving the Colts, Anson briefly managed the New York Giants. He ran several enterprises in Chicago, including opening a billiards and bowling hall and running a semi-professional baseball team he dubbed "Anson's Colts". Anson also toured extensively on the vaudeville circuit, performing monologues and songs. Many of his business ventures failed, resulting in Anson losing his ownership stake in the Colts (by then called the Cubs) and filing for bankruptcy.

Anson was inducted into the National Baseball Hall of Fame in 1939.