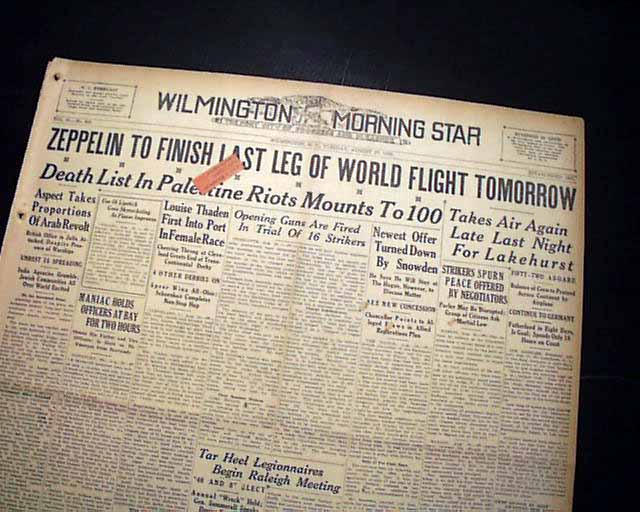 This10 page newspaper has a banner headline on the front page: "ZEPPELIN TO FINISH LAST LEG OF WORLD FLIGHT TOMORROW" with subheads (see photos).

Other news, sports and advertisements of the day. Light browning, minor margin wear ans small library label on the front page within headline, otherwise good. Should be handled with care.

wikipedia notes: The growing popularity of the "giant of the air" made it easy for Zeppelin company chief Dr. Hugo Eckener to find sponsors for a "Round-the-World" flight. One of these was the American press tycoon William Randolph Hearst, who requested the tour to officially start at Lakehurst Naval Air Station, NJ. As with the October 1928 flight to New York, Hearst had placed a reporter, Grace Marguerite Hay Drummond-Hay, on board, who thereby became the first woman to circumnavigate the globe by air.

Starting there on 8 August 1929, Graf Zeppelin flew back across the Atlantic to Friedrichshafen to refuel before continuing on August 15 across the vastness of Siberia to Tokyo (Kasumigaura Naval Air Station), a nonstop leg of 6,988 miles (11,246 km), arriving 3 days later on 18 August.[7] Dr. Eckener believed that some of the lands they crossed in Siberia had never before been seen by modern explorers. After staying in Tokyo for five days, on 23 August, the Graf Zeppelin continued across the Pacific to California flying first over San Francisco before heading south to stop at Mines Field in Los Angeles for the first ever nonstop flight of any kind across the Pacific Ocean. The Pacific leg was 5,998 miles (9,653 km) and took three days. The airship's final leg across the United States took it over Chicago before landing back at Lakehurst NAS on 29 August, taking two days and covering 2,996 miles (4,822 km).

The flying time for the Lakehurst to Lakehurst legs was 12 days and 11 minutes. The entire voyage took 21 days, 5 hours and 31 minutes including the initial and final trips between Friedrichshafen and NAS Lakehurst during which time the airship travelled 49,618 km (30,831 miles) whereas the distance covered on the designated "Round the World" portion from Lakehurst to Lakehurst was 31,400 km (19,500 miles). One of Hearst's guests on board was the newlywed couple; the Arctic explorer Sir Hubert Wilkins and his bride Suzanne Bennett. The trip was given to them as a wedding gift.