Home > Back to Search Results > James A. Garfield monument...
Click image to enlarge 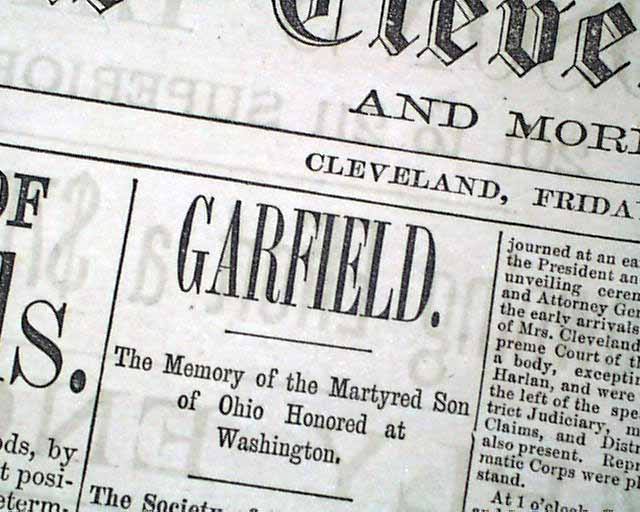 This 8 page newspaper has one column headlines on the front page that include: "GARFIELD", "The Memory of the Martyred Son of Ohio Honored at Washington", "The Unveiling of the Heroic Bronze Statue Erected By the Brave Veterans", and more with illustration of the Monument. 1st report coverage on the unveiling of the James A. Garfield monument. Lengthy text included.

Other news and advertisements of the day. Good condition. Should be handled with care.

wikipedia notes: The James A. Garfield Monument stands on the grounds of the United States Capitol in the circle at First Street, S.W., and Maryland Avenue, Washington, D.C. It is a memorial to President James A. Garfield, elected in 1880 and assassinated in 1881 after serving only four months of his term, by a disgruntled office-seeker named Charles J. Guiteau.

The monument, sculpted by John Quincy Adams Ward (1830-1910) and cast by The Henry-Bonnard Co. of New York, with a pedestal designed by Richard Morris Hunt, is an outstanding example of American Beaux-Arts sculpture. It was unveiled on May 12, 1887.