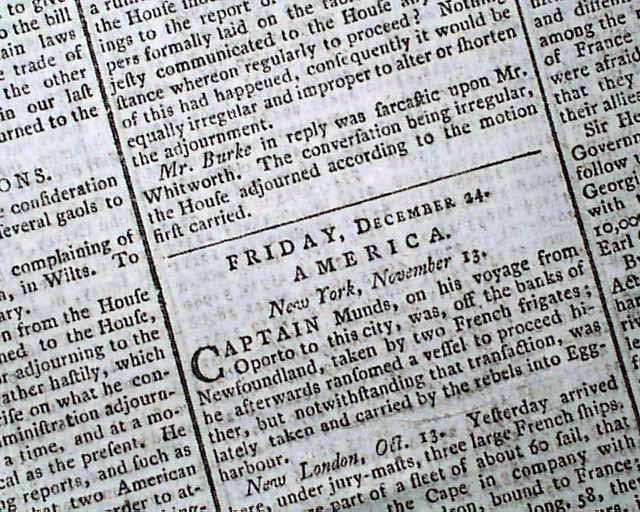 The middle of the front page has a few items under the heading "America". Near he back is a full page of text under the heading "America" with numerous war-related reports, bits including: "...from the neighbourhood of Albany we learn that the friends to government...continue as firm & unshaken in their loyalty as ever, though the most unparalleled cruelty & oppression have been exercised over their persons & properties...Young Mr. Clarkson, a Rebel Aid-de-Camp who was present at the attack of Savannah...carried the doleful tidings of their great & good ally's late disgrace to Philadelphia, & it is said proceeded with them to Mr. Washington's camp..." with more. Also a letter from New London on events in that theater, then reports from Charleston noting: "...Col. Maitland...had made his escape from Beaufort & joined General Prevost at Savannah...The enemy were strongly fortified by lines, redoubts & abbattis in the town of Savannah...Count d'Estaign had landed 5000 troops & formed a junction with General Lincoln...". And there are also reports form near Fort Sullivan and Boston (see for portions).
Eight pages, 8 1/2 by 11 inches, very nice condition.