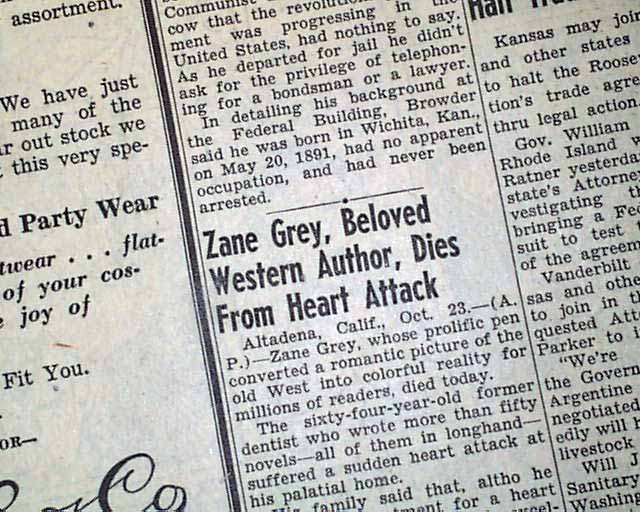 This 14 page newspaper has a small one column headline on the back page: "Zane Grey, Beloved Western Author, Dies From Heart Attack".

Other news, sports and advertisements of the day. A little spine wear, otherwise good condition.

wikipedia notes: Zane Grey was known as an American author best known for his popular adventure novels and stories that presented an idealized image of the rugged Old West. As of June 2007, the Internet Movie Database credits Grey with 110 films, one TV episode, and a series, Dick Powell's Zane Grey Theater based loosely on his novels and short stories.

Zane Grey died of heart failure on October 23, 1939 at his home in Altadena, California. He was interred at the Union Cemetery in Lackawaxen, Pennsylvania, where the National Park Service maintains the Zane Grey Museum as part of the Upper Delaware Scenic and Recreational River. His home in Altadena is listed in the National Register of Historic Places. In his hometown there is a museum called National Road Zane Grey Museum. Zane Grey Terrace, a small residential street in the hillsides of Altadena, is named in his honor.