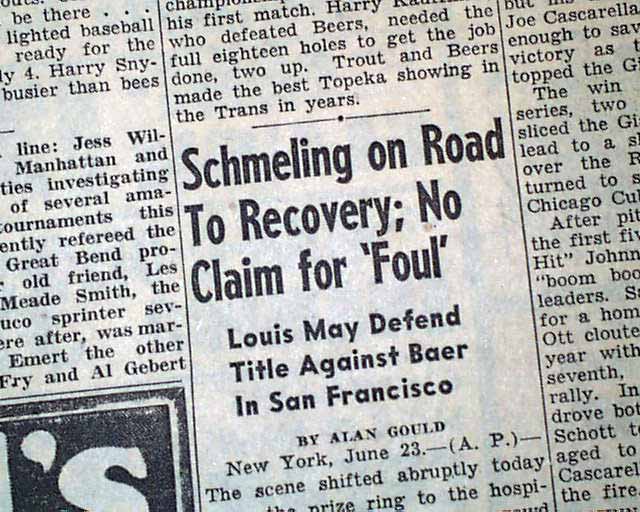 This 16 page newspaper has one column headings on page 10: "Schmeling on Road To Recovery; No Claim for 'Foul'" and "Louis May Defend Title Against Baer In San Francisco."

Other news, sports and advertisements of the day are included. This issue has a little spine wear, but is otherwise in nice condition.

wikipedia notes: The rematch between Louis and Schmeling is one of the most famous boxing matches of all time, and is remembered as one of the major sports events of the 20th century. Following his defeat of Louis in 1936, Schmeling became a national hero in Germany. Schmeling's victory over an African American was touted by Nazi officials as proof of their doctrine of Aryan superiority. When the rematch was scheduled, Louis retreated to his boxing camp in New Jersey and trained incessantly for the fight. A few weeks before the bout, Louis visited the White House, where President Franklin D. Roosevelt told him, "Joe, we need muscles like yours to beat Germany." Louis later admitted: "I knew I had to get Schmeling good. I had my own personal reasons and the whole damned country was depending on me."

When Schmeling arrived in New York in June, 1938 for the rematch, he was accompanied by a Nazi party publicist who issued statements that a black man could not defeat Schmeling, and that when Schmeling won, his prize money would be used to build tanks in Germany. Schmeling's hotel was picketed by anti-Nazi protesters in the days before the fight.

On the night of June 22, 1938, Louis and Schmeling met for the second time in the boxing ring. The fight was held in Yankee Stadium before a crowd of 70,043. It was broadcast by radio to millions of listeners throughout the world, with radio announcers reporting on the fight in English, German, Spanish, and Portuguese. Before the bout, Schmeling weighed in at 193 pounds; Louis weighed in at 198¾ pounds.

The fight lasted two minutes and four seconds. Louis battered Schmeling with a series of swift attacks, forcing Schmeling against the ropes and giving him a paralyzing body blow (Schmeling later claimed it was an illegal kidney punch). Schmeling was knocked down three times, and only managed to throw two punches in the entire bout. On the third knockdown, Schmeling's trainer threw in the towel and referee Arthur Donovan stopped the fight.