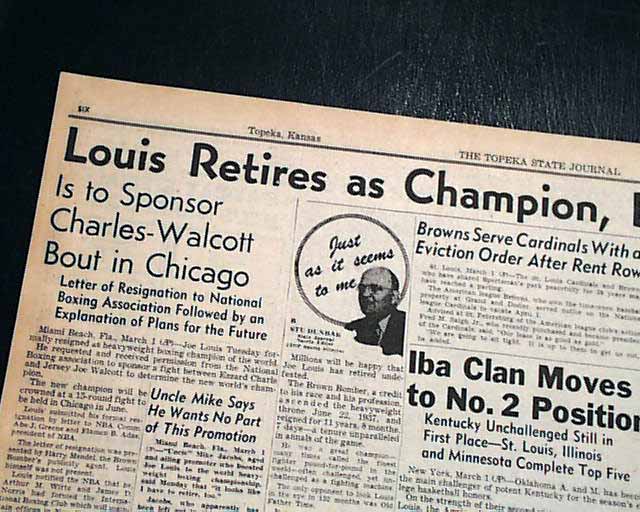 This 14 page newspaper has a nice banner headline on page 6: "Louis Retires as Champion, Becomes Promoter" with subheads (see photos). Although this was big news at the time, Louis would decide to continue fighting until October of 1951.

Other news, sports and advertisements of the day throughout. A little margin wear, otherwise good condition.

wikipedia notes: Joseph Louis Barrow (May 13, 1914–April 12, 1981), better known as Joe Louis, was a heavyweight boxing champion. Nicknamed the Brown Bomber, he is considered to be one of the greatest in boxing history and was ranked number one on Ring Magazine's list of 100 greatest punchers of all time. Louis held the heavyweight title for over 106 months, more than anyone else before or after him, recording 25 successful defenses of the title. In 2005, Louis was named the greatest heavyweight of all time by the International Boxing Research Organization.[1] He participated in 27 heavyweight championship fights, a record which still stands.

In the turbulent era during World War II, he became a national hero in America, partly because of his comment about the Allies, "We're gonna win 'cause we're on God's side".