Home > Earliest mention of Babe Ruth in a newspaper?...
Click image to enlarge 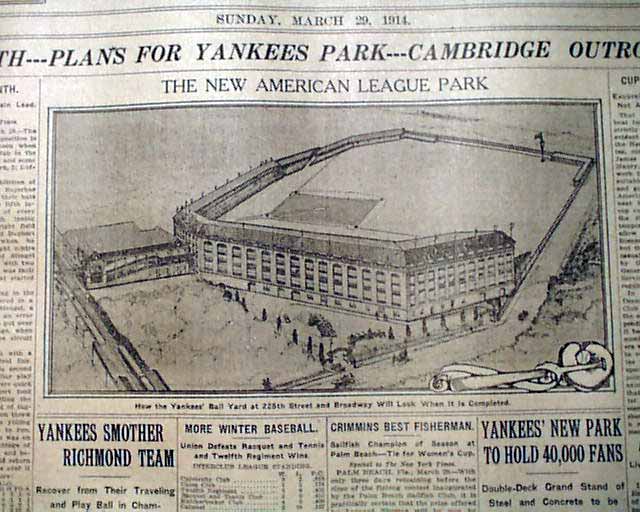 Earliest mention of Babe Ruth in a newspaper?...

This newspaper contains the earliest mention of Babe Ruth in this venerable newspaper, and perhaps the earliest mention of him in any newspaper. This was a pre-season game from his first year as a professional baseball player.
The report is brief yet significant with a dateline of Baltimore, March 29. The game was between the Philadelphia Americans and the Baltimore Internationalist (Ruth played for Baltimore), and his name is mentioned in the list of the "Batteries" (see photo).
Also of interest on the same page is a nice illustration of the new ball park being built by the Yankees, with the report headed: "Yankees' New Park To Hold 40,000 Fans" "Double-Deck Grand Stand of Steel and Concrete to be Completed in September" with much related text. This park was to be built at 225th Street and Broadway. But I can find no record of this park in Yankee history. Records indicate the Yankees shared the Polo Grounds with the Giants from 1913 thru the early 1920s when "the house that Ruth built" was constructed. Was this 1914 stadium ever built?
Two great Yankee items in this issue of the New York Times. The complete Sunday edition, minor margin wear, good condition.