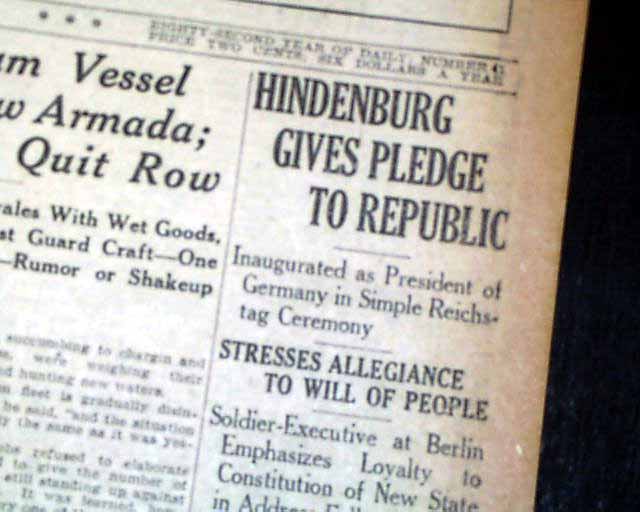 This 18 page newspaper has a one column headlines on the front page that include: "HINDENBURG GIVES PLEDGE TO REPUBLIC", "Inaugurated as President of Germany in Simple Reichstag Ceremony' and more (see photos). 1st report coverage of Paul Von Hindenburg becoming the new president of Germany.

Hindenburg enjoyed a long if undistinguished career in the Prussian army, eventually retiring in 1911. He was recalled at the outbreak of the First World War, and first came to national attention, at the age of sixty-six, as the victor at Tannenberg in 1914. As Germany's Chief of the General Staff from 1916, he and his deputy, Erich Ludendorff, rose in the German public's esteem until Hindenburg came to eclipse the Kaiser himself. Hindenburg retired again in 1919, but returned to public life one more time in 1925 to be elected as the second President of Germany.

Though 84 years old and in poor health, Hindenburg was obliged to run for re-election in 1932 as the only candidate who could defeat Adolf Hitler, which he did in a runoff. In his second term as President, he did what he could to oppose the Nazi Party's rise to power, but was eventually obliged to appoint Hitler as Chancellor in January 1933. In March he signed the Enabling Act of 1933 which gave special powers to Hitler's government. Hindenburg died the next year, after which Hitler declared the office of President vacant and made himself the "Führer", or the combination of the president and chancellor.

The famed zeppelin Hindenburg that was destroyed by fire in 1937 had been named in his honour, as is the Hindenburgdamm, a causeway joining the island of Sylt to mainland Schleswig-Holstein that was built during his time in office.