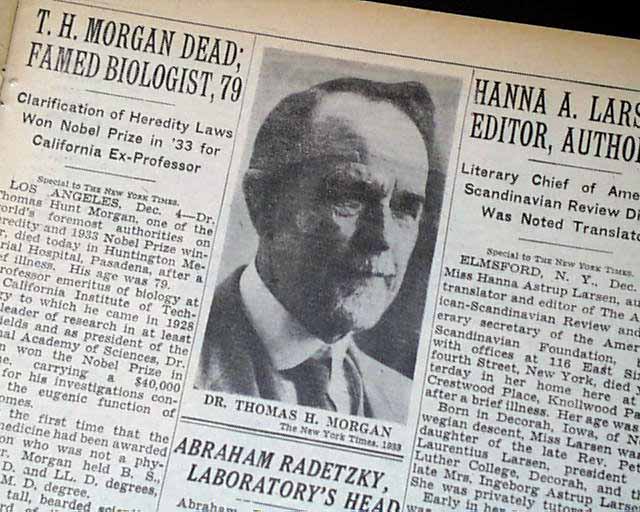 This 44 page newspaper has one column headlines on page 25: "T. H. MORGAN DEAD; FAMED BIOLOGIST, 79", "Clarification of Heredity, Laws Won Nobel Prize in '33 for California Ex-Professor" with photo of Thomas H. Morgan. A first report on his death.

Other news, sports and advertisements of the day throughout. minor spine wear, otherwise in nice condition.

wikipedia notes: Thomas Hunt Morgan (September 25, 1866 – December 4, 1945) was an American evolutionary biologist, geneticist and embryologist and science author who won the Nobel Prize in Physiology or Medicine in 1933 for discoveries relating the role the chromosome plays in heredity.

Morgan received his PhD from Johns Hopkins University in zoology in 1890 and researched embryology during his tenure at Bryn Mawr. Following the rediscovery of Mendelian inheritance in 1900, Morgan's research moved to the study of mutation in the fruit fly Drosophila melanogaster. In his famous Fly Room at Columbia University Morgan was able to demonstrate that genes are carried on chromosomes and are the mechanical basis of heredity. These discoveries formed the basis of the modern science of genetics. He was awarded the 1933 Nobel Prize in Physiology or Medicine for his work in genetics.

During his distinguished career, Morgan wrote 22 books and 370 scientific papers, and, as a result of his work, Drosophila became a major model organism in contemporary genetics. The Division of Biology he established at the California Institute of Technology has produced seven Nobel Prize winners.