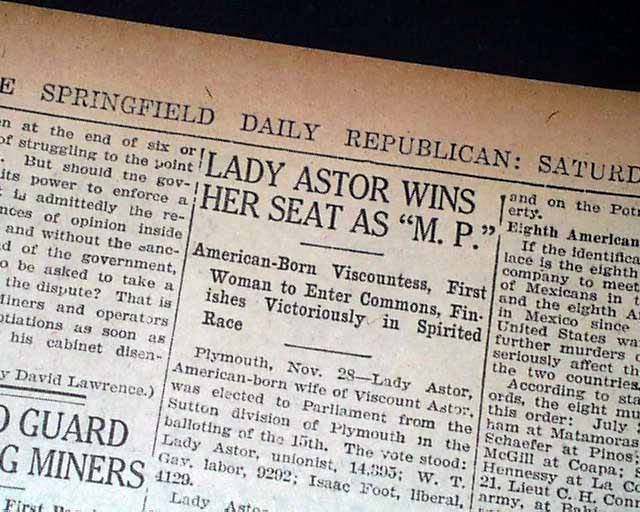 Other news, sports, and advertisements are included. This issue has light browning and minor margin wear, but is otherwise good. It should be handled with care.

wikipedia notes: Nancy Witcher Astor, Viscountess Astor, CH, (19 May 1879 – 2 May 1964) was the first woman to sit as a Member of Parliament (MP) in the British House of Commons. Nancy Astor represented the Conservative Party and was the wife of Waldorf Astor, 2nd Viscount Astor.

Several elements of Lady Astor's life to this point influenced her first campaign, but the main reason she became a candidate in the first place was her husband's situation. He had enjoyed a promising career for several years before World War I in the House of Commons, but then he succeeded to his father's peerage as the 2nd Viscount Astor. This meant that he automatically became a member of the House of Lords and forfeited his seat of Plymouth Sutton in the House of Commons. So Lady Astor decided to contest the vacant parliamentary seat.

Astor had several disadvantages in her campaign. One of them was her lack of connection with the women's suffrage movement. The first woman elected to the British Parliament, Constance Markiewicz, said Lady Astor was "of the upper classes, out of touch". (While Lady Astor was the first female member of the House of Commons who actually took up her seat, she was not the first woman to be elected to the House. Markiewicz did not take up her seat because of her Irish Republican views.) Countess Markiewicz had been in Holloway prison for Sinn Féin activities during her election, and other suffragettes had been imprisoned for arson; Astor had no such background. Even more damaging to Astor's campaign were her well-known hostility to alcohol consumption and her ignorance of current political issues. These points did not endear her to the people of Plymouth, the constituency from which she was elected. Perhaps worst of all, her tendency to say odd or outlandish things sometimes made her look rather unstable.

However, Astor also had some positive attributes in her campaign, such as her earlier work with the Canadian soldiers, her other charitable work during the war, her vast financial resources for the campaign and, most of all, her ability to improvise. Her ability to turn the tables on the hecklers was particularly useful. Once a man asked her what the Astors had done for him and she responded with, "Why, Charlie, you know,"  and later had a picture taken with him. This informal style baffled yet amused the British public. She rallied the supporters of the current government, was pragmatic enough to moderate her Prohibitionist views, and used women’s meetings to gain the support of female voters. A by-election was held on 28 November 1919, and she took up her seat in the House on 1 December as a Unionist (also known as "Tory") Member of Parliament.