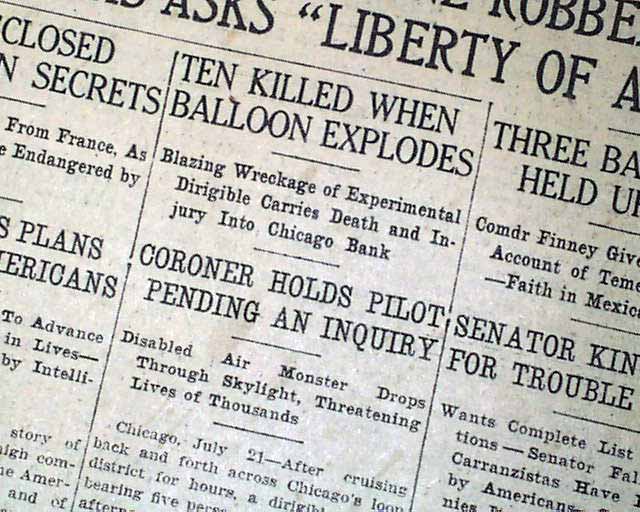 This 16 page newspaper has one column headlines on the front page that include: "TEN KILLED WHEN BALLOON EXPLODES", "Blazing Wreckage of Experimental Dirigible Carries Death and Injury Into Chicago Bank", "Disabled Air Monster Drops Through Skylight, Threatening Lives of Thousands", and more (see photos). Coverage on the Wingfoot Air Express Crash.

Other news of the day including a report in the sport's section telling of Babe Ruth hitting a home run during a game in which he pitched for the Boston Red Sox (see photos).

Other news of the day are included. This issue has light browning and a little margin wear, but is otherwise in good condition.

wikipedia notes: The Wingfoot Air Express was a dirigible that crashed into the Illinois Trust and Savings Building in Chicago on Monday July 21, 1919. The dirigible, owned by the Goodyear Tire and Rubber Company was transporting people from Grant Park to the White City amusement park. One crew member, two passengers, and ten bank employees were killed in what was, up to that point, the worst dirigible disaster in United States history.