Home > Back to Search Results > 1st around the World airplane flight begins...
Click image to enlarge 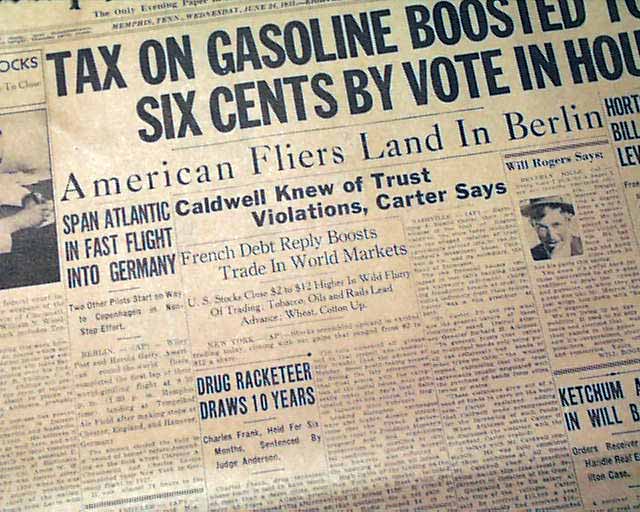 This 18 page newspaper has five column headline on the front page: "American Fliers Land in Berlin". Other news of the day including period advertising. This issue has light browning with little margin wear and chipping, irregular at the spine, otherwise good.

wikipedia notes: Like many pilots at the time, Post disliked the fact that the speed record for flying around the world was not held by a fixed-wing aircraft, but by the Graf Zeppelin, piloted by Hugo Eckener in 1929 with a time of 21 days. On June 23, 1931, Post and his navigator, Harold Gatty, left Roosevelt Field on Long Island, New York in the Winnie Mae with a flight plan that would take them around the world, stopping at Harbour Grace, Flintshire, Hanover twice, Berlin, Moscow, Novosibirsk, Irkutsk, Blagoveshchensk, Khabarovsk, Nome where his airscrew had to be repaired, Fairbanks where the airscrew was replaced, Edmonton, and Cleveland before returning to Roosevelt Field. They arrived back on July 1, after traveling 15,474 miles (24,903 km) in the record time of 8 days and 15 hours and 51 minutes. The reception they received rivaled Lindbergh's everywhere they went. They had lunch at the White House on July 6, rode in a ticker-tape parade the next day in New York City, and were honored at a banquet given by the Aeronautical Chamber of Commerce of America at the Hotel Astor. After the flight, Post acquired the Winnie Mae from F.C. Hall, and he and Gatty published an account of their journey titled, Around the World in Eight Days, with an introduction by Will Rogers.