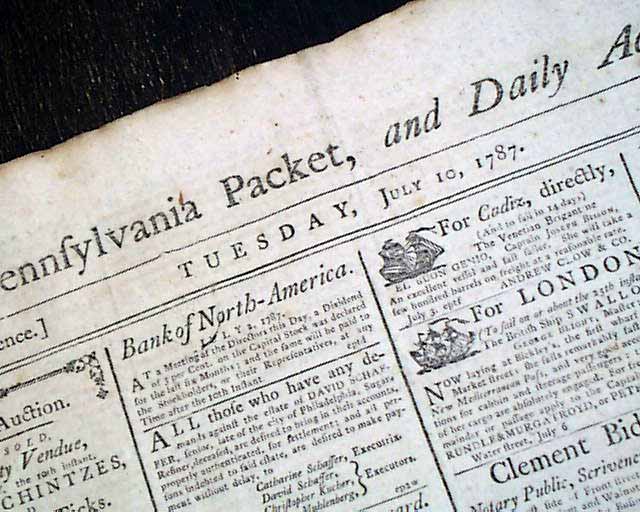 
PENNSYLVANIA PACKET, Philadelphia, July 10, 1787  At the time of this printing the Constitutional Convention was in session in Philadelphia. Page 2 has a significant & early report on Daniel Mendoza the Jewish boxer. Mendoza was so popular that the London press reported news of one of his bouts ahead of the storming of the Bastille which marked the start of the French Revolution. He transformed the English stereotype of a Jew from a weak, defenseless person into someone deserving of respect. He is said to have been the first Jew to talk to the King, George III. He would become the boxing champion of England from 1792 to 1795. (Wikipedia)
The report at the top of page 2 is headed: "Boxing Match" and reports on the match between Martin and Mendoza, and noting: "...At the onset the odds were two to one in favour of Martin...Mendoza appeared to be the more muscular of the two. And when they had fought 28 minutes Martin gave up the battle. The Jew's stile of fighting was much the neatest & quickest..." with more (see). A significant Judaica item.
the back page has 9 runaway reward ads, most quite detailed. Four pages, untrimmed margins, excellent condition.