Home > Back to Search Results > The fall of Cherbourg, France...
Click image to enlarge 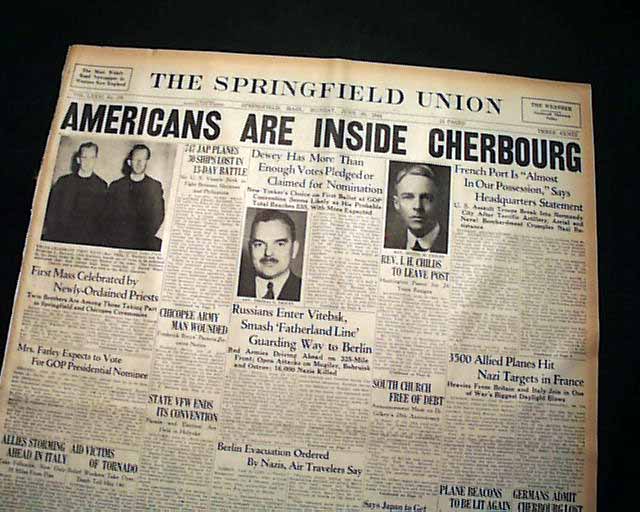 The fall of Cherbourg, France...

This 12 page newspaper has a nice banner headline on the front page: "AMERICANS ARE INSIDE CHERBOURG" with subheads (see photos). Other news of the day with much on World War II. Light browning, otherwise good condition.

wikipedia notes: Operation Overlord was the code name for the invasion of northwest Europe during World War II by Allied forces. The operation began with the Normandy Landings on June 6, 1944 (commonly known as D-Day), among the largest amphibious assaults ever conducted. Nearly 160,000 troops crossed the English Channel on 6 June, landing more than 3 million troops by the end of August.

Allied land forces that saw combat in Normandy on D-Day itself came from Canada, the United Kingdom and the United States of America. Substantial Free French and Polish forces also participated in the battle after the assault phase, and there were also contingents from Belgium, Czechoslovakia, Greece, the Netherlands, and Norway.[12] Other Allied nations participated in the naval and air forces. Once the beachheads were secured, a three-week military buildup occurred on the beaches before Operation Cobra, the operation to break out from the Normandy beachhead began. The battle for Normandy continued for more than two months, with campaigns to establish a foothold on France, and concluded with the close of the Falaise pocket, the subsequent liberation of Paris on 25 August 1944, and the German retreat across the Seine which was completed on 30 August 1944.