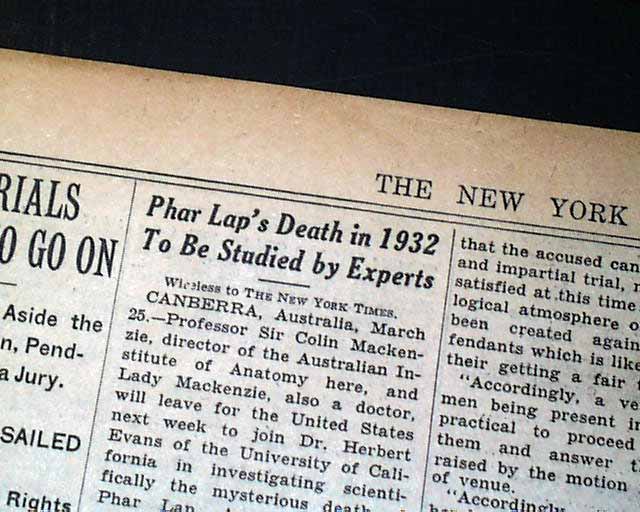 * re. Phar Lap's death
* Australian racehorse
* Cause to be re-examined

This 48 page newspaper has a small one column headline on the back page (page 48): "Phar Lap's Death in 1932 To Be Studied by Experts". See photo for brief text here. Nice to have in this famous NYC title.

Other news, sports and advertisement of the day throughout. A few small archival mends at the margins, otherwise good condition.

Early on 5 April 1932, the horse's strapper for the North American visit, Tommy Woodcock, found him in severe pain and having a high temperature. Within a few hours, Phar Lap haemorrhaged to death. Much speculation ensued, and when a necropsy revealed that the horse's stomach and intestines were inflamed, many believed the horse had been deliberately poisoned. There have been alternative theories, including accidental poisoning from lead insecticide and a stomach condition. It was not until the 1980s that the infection could be formally identified.

However, in 2006 Australian Synchrotron Research scientists said it was almost certain Phar Lap was poisoned with a large single dose of arsenic in the hours before he died, perhaps supporting the theory that Phar Lap was killed on the orders of U.S. gangsters, who feared the Melbourne-Cup-winning champion would inflict big losses on their illegal bookmakers. No real evidence of involvement by a criminal element exists, however.

Sydney veterinarian Percy Sykes believes poisoning did not cause the death. He said "In those days, arsenic was quite a common tonic, usually given in the form of a solution (Fowler's Solution)," and suggests this was the cause of the high levels. "It was so common that I'd reckon 90 per cent of the horses had arsenic in their system." In December 2007 Phar Lap's mane was tested to find if he was given repeated doses of arsenic which, if found, would point to accidental poisoning.

On 19 June 2008, the Melbourne Museum released the findings of the forensic investigation conducted by Dr. Ivan Kempson, University of South Australia, and Dermot Henry, Natural Science Collections at Museum Victoria. Dr. Kempson took six hairs from Phar Lap’s mane and analyzed them at the Advanced Photon Source at Argonne National Laboratory near Chicago. These high resolution x-rays detect arsenic in hair samples, showing the specific difference "between arsenic, which had entered the hair cells via the blood and arsenic, which had infused the hair cells by the taxidermy process when he was stuffed and mounted at the museum".

Kempson and Henry discovered that in the 30 to 40 hours before Phar Lap’s death, the horse ingested a massive dose of arsenic. "We can't speculate where the arsenic came from, but it was easily accessible at the time," Henry said.