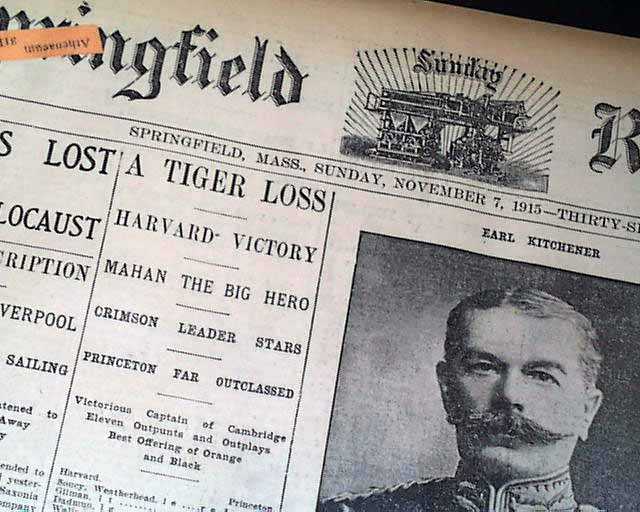 This 36 page newspaper has one column headlines on the front page that include: "A TIGER LOSS", "HARVARD VICTORY", "MAHAN THE BIG HERO", "Crimson Leader Stars" and more with lineup and photo of Eddie Mahan. Nice to have on the front page and from the city close to Harvard.

Other news, sports and advertisements of the day. Light browning, minor margin wear, otherwise good condition. Should be handled with care.

wikipedia notes: Edward William "Eddie" Mahan (January 19, 1892 – July 22, 1975) was an American football player. While playing halfback for Harvard, Mahan was selected as a first-team All-American three consecutive years from 1913–1915. He was widely regarded as one of the greatest football players in the first 50 years of the sport and was named by Jim Thorpe as the greatest football player of all time. In 1951, he was elected to the College Football Hall of Fame as part of the first group of inductees.