Home > Back to Search Results > The White League... report to Congress...
Click image to enlarge 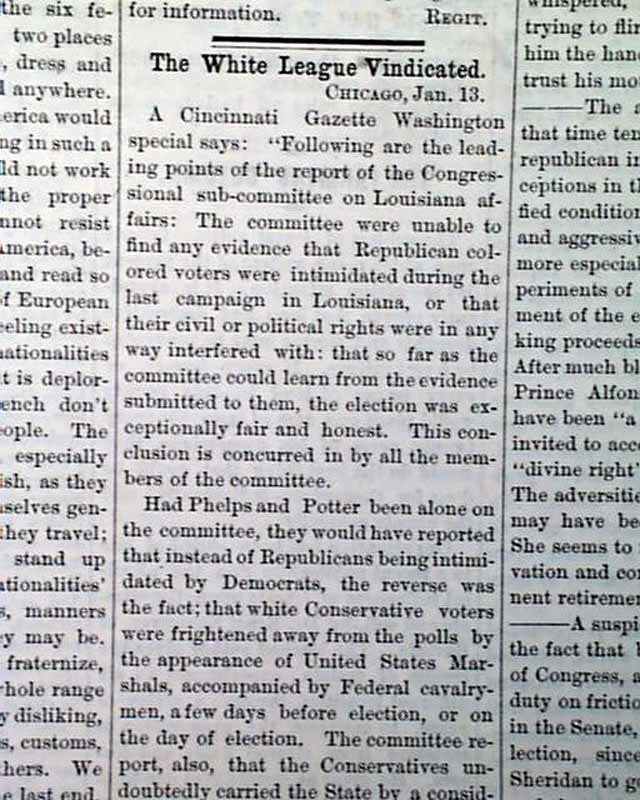 The White League... report to Congress...


LOS ANGELES WEEKLY STAR, Los Angeles, California, January 23, 1875  The front page of this issue features "The White League Vindicated" in which it reports "The committee were unable to find any evidence that Republican colored voters were intimidated during the last campaign in Louisiana, or that their civil or political rights were in any way interfered with: that so far as the committee could learn from the evidence submitted to them, the election was exceptionally fair and honest. This conclusion is concurred in by all the members of the committee...". The report proceeds to state "... that instead of Republicans being intimidated by Democrats, the reverse was the fact; that white Conservative voters were frightened away form the polls by the appearance of United Sates Marshals, accompanied by Federal cavalrymen, a few days before election, or on the day of election...". and that "...It is not a secret organization, and numbers among its members scores and hundreds of the very best men in the city -- New Orleans; men who are most prominent in business and who would not countenance lawlessness of any kind...".  Other news and advertisements are within.

This is complete in four pages, with a slight irregular spine and edge tears, otherwise in good condition. Stray handwriting is above the masthead.