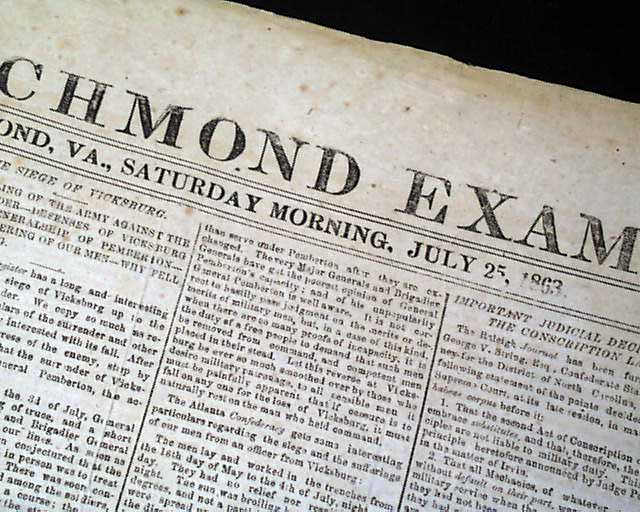 Terrific commentary on Vicksburg and Gettysburg...

* Battle of Gettysburg
* Siege of Vicksburg, Mississippi
* From the capital of the Confederacy

A nice newspaper from the capital of the Confederate States, the city through which all war-related news would flow.This issue is significant for having some post-Gettysburg reports and good content on the fall of Vicksburg.
The top of the first column has:"The Army of Northern Virginia" which includes: "Rumour...located the hqts. of General Lee in the vicinity of Gordonsville...Portions of Meade's army...without pressing closely, were...located at Sperryville...' (see). Further on is: "About one thousand Yankee prisoners taken at Gettysburg were marched through Main Street yesterday morning to the Libby...".
Perhaps of most significance on the front page is nearly 1 1/2 columns headed: "The Siege of Vicksburg" "The Feeling of the Army Against the Surrender--Defenses Of Vicksburg--The Generalship of Pemberton--The Suffering of Our Men--Why Fell Vicksburg" with the detailed text essentially being a great account of the surrender of Vicksburg as reported in the "Mobile Register" newspaper (see for portions). This is followed by another report as found in the Atlanta "Confederacy" newspaper.
Also on the front page; "The Enemy's Force Before Charleston" "The Situation Off Charleston" "Speech Of Vice President Stephens" and "Important Judicial Decision On The Conscription Law".
The back page has the always interesting editorial, portions having content relating to Gettysburg and Vicksburg, including: "...The sadness which lately seized possession of the Southern people though not without cause, was without justification. It was due to two great misfortunes occurring simultaneously...The repulse at Gettysburg was certainly an event which there was no reason to anticipate. It was the result of an unnecessary attack upon the enemy at the only point in the whole North where an attack was quite desperate & hopeless...It rendered abortive what was far the most important movement of the war...It was a great enterprise...worthy of the bravery & generalship that have distinguished our Southern armies. It failed by a single accident, by a single mistake--that sad one at Gettysburg..." and which also includes a truly incredible stretch in putting a positive spin on an historic loss: The result was not a defeat, it was not a loss; it was only not a victory...It was little else than a disappointment of extraordinary expectations..." with more. And a bit further on in the editorial is: "The other great cause of the late depression was the capitulation of Vicksburg. that also was a surprise..." with much more, Also: "In the matters of Gettysburg and Vicksburg we have sustained heavy disappointments..." with even more (see).
And there is much more on the back page as well including; "Additional From the North--How The Yankees Got Their Foothold On Morris Island" "Yankee Operations in North Carolina" "The Army Of Vicksburg" "The Raid On Wytheville--Additional Particulars of the Yankee Repulse" and many subheads.
Complete as a single sheet newspaper with a banner masthead, never bound nor trimmed, a small piece from the bottom blank margin not touching any text, generally in nice condition.