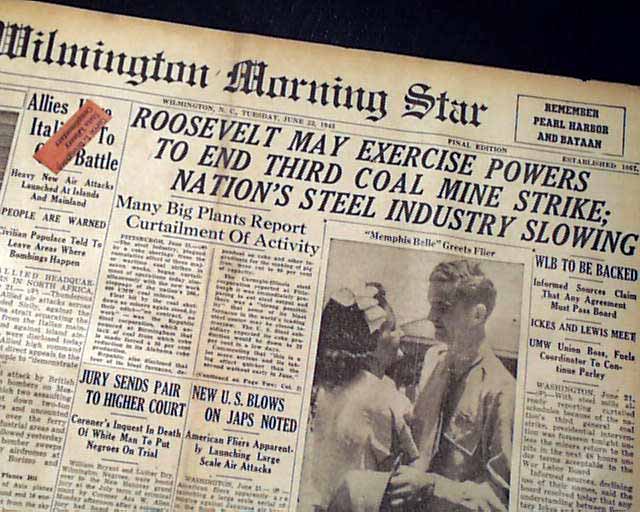 Other news, sports and advertisements of the day with much on World War II. Light browning, little margin wear, otherwise in good condition.

The altercations between black and white youth started on June 20, 1943, on a warm Saturday evening on Belle Isle. A fist fight broke out between a white man and a black man. The brawl eventually grew into a confrontation between groups of blacks and whites and then spread into the city. Rumors had started that a black woman had been assaulted by a white man. Another rumor was that a white woman was raped and killed by a black man. Stores were looted and buildings were burned in the riot, most of which were in a black neighborhood roughly two miles in and around Paradise Valley, one of the oldest and poorest neighborhoods in Detroit. The clashes soon escalated to the point where black and white mobs were “assaulting one another, beating innocent motorists, pedestrians and streetcar passengers, burning cars, destroying storefronts and looting businesses."[1] Both sides were said to have encouraged others to join in the riots with false claims that one of “their own” was attacked unjustly. During 36 hours of rioting there were 700 injuries and 34 people died, 25 of them black. More than 1,800 were arrested for looting and other incidents, the vast majority being black. Thirteen murders remain unsolved.