Home > Back to Search Results > Game of the Century... Norte Dame vs. Ohio Buckeyes...
Click image to enlarge 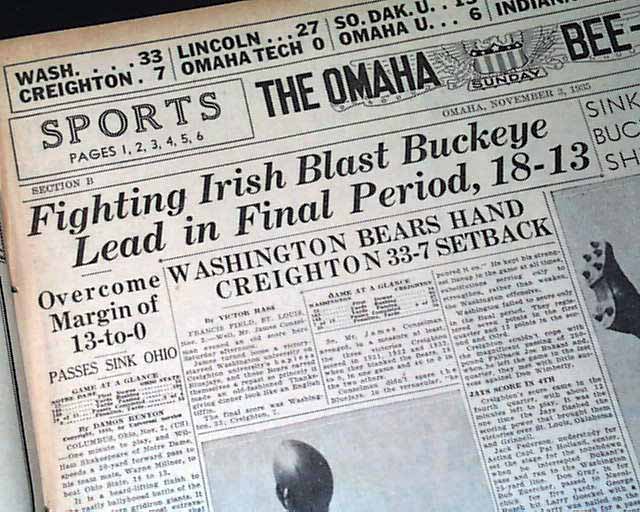 Game of the Century... Norte Dame vs. Ohio Buckeyes...

This 36 page newspaper has a nice four column headline on the front page of the sport's section (inside): "Fighting Irish Blast Buckeye Lead in Final Period, 18-13" with subheads, stats, lineup and tow large photos of Wayne Millner and Andy Pilney.

This tells of the famous game between the Notre Dame Fighting Irish and the Ohio State Buckeyes. This game is considered by many the game of the century amongst a few others.

wikipedia notes: November 2 Notre Dame (5-0-0) and Ohio State (4-0-0) met at Columbus before a crowd of 80,000. Grantland Rice described what happened: "Completely outplayed in the first two quarters, trailing 13 to 0 as the final quarter started with every killing break against it-- breaks that would crack the heart of an iron ox-- this Notre Dame team came surging back in the final quarter...". Notre Dame scored early in the fourth, but the extra point attempt bounced off the crossbar, and it was 13-6. After an interception, the Irish drove to within six inches of the goal line 0when Milner fumbled the ball away. With 90 seconds left, Andy Pilney passed to Mike Layden for a touchdown, but the extra point failed and the Irish trailed 13-12. Andy Pilney forced a Buckeye fumble at midfield, giving the Irish the ball at the 49 yard line, and on the next play, Pilney, taking back over as quarterback, scrambled to the 19 yard line, but was injured. With only one play left in the game, reserve quarterback Bill Shakespeare passed to Wayne Milner for the 18-13 win.