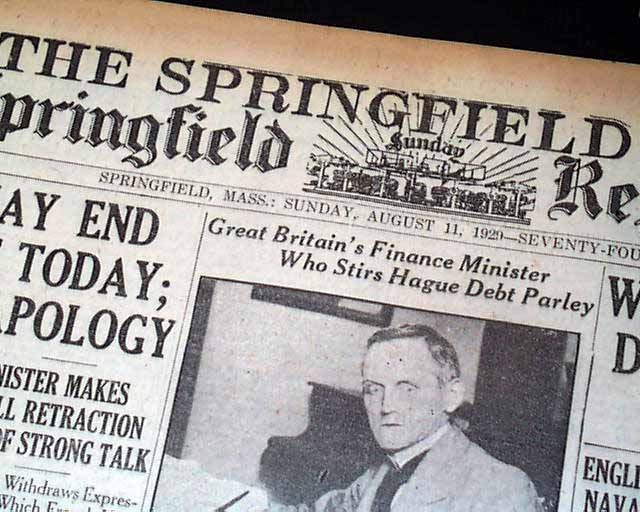 This 40+ page newspaper has a small one column headline on page 2 of the sport's section (inside): "Phillies and Cards Divide Double Bill" with box scores. This tells of St. Louis Cardinals pitcher Grover Alexander breaking the all-time win record at the time.

Other news of the day throughout including a front page report of the Graf Zeppelin breaking the Transatlantic flight record. Light browning, little margin wear, otherwise good.

wikipedia notes: Grover Cleveland "Old Pete" Alexander (February 26, 1887 – November 4, 1950) was an American professional baseball pitcher. He played in Major League Baseball for the Philadelphia Phillies, Chicago Cubs, and St. Louis Cardinals. He was elected into the Baseball Hall of Fame in 1938.

Alexander's 90 shutouts are a National League record and his 373 wins are tied with Christy Mathewson for first in the National League record book. He is also third all time in wins, tenth in innings pitched (5190), second in shutouts, and eighth in hits allowed (4868). At the time of Alexander's final victory, in August 1929, the news media reported that he had broken Mathewson's career victories record of 372. In the 1940s, Mathewson was discovered to have qualified for an additional victory (May 21, 1902) and his total was officially upped to 373 and into a tie with Alexander.