Home > Back to Search Results > 1st Hawaii flight from mainland in 1927...
Click image to enlarge 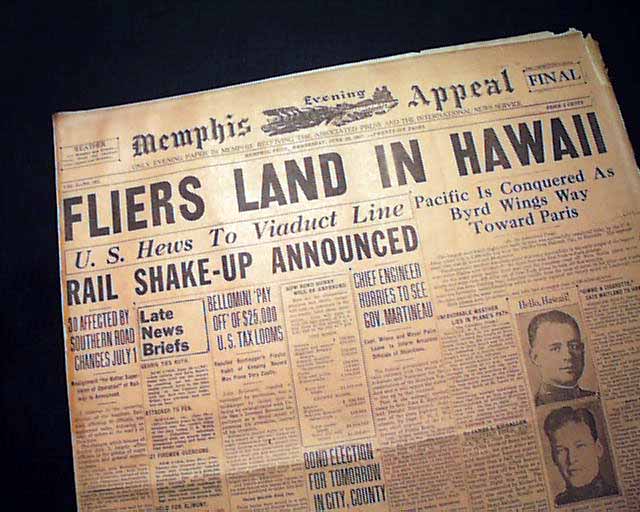 This 26 page newspaper has a great banner headline on the front page: "FLIERS LAND IN HAWAII" with subheads and photos of the two pilots. A historic issue in aviation. Nice for display.

Other news, sports and advertisements of the day. Light browning, some margin wear, tear and chipping, irregular at the spine, otherwise good.

wikipedia notes: Lester J. Maitland (February 8, 1899 - March 27, 1990) was an aviation pioneer and a veteran pilot of World War I and World War II. Lester Maitland was a U.S. Army Air Service pilot and Brigadier General born in Milwaukee, Wisconsin. In 1927 Maitland and Lt. Albert Hegenberger completed the first trans-Pacific flight from California to Hawaii. Although the acclaim given Maitland and Hegenberger for their accomplishment was limited in comparison with adulation for Lindbergh whose trans-Atlantic flight had taken place only weeks earlier, their accomplishment was possibly greater from a naviational stand point. Maitland remained in the Army Air Force, serving as a Brigadier General during World War II. He later became the first director of the Wisconsin Aeronautics Commission.