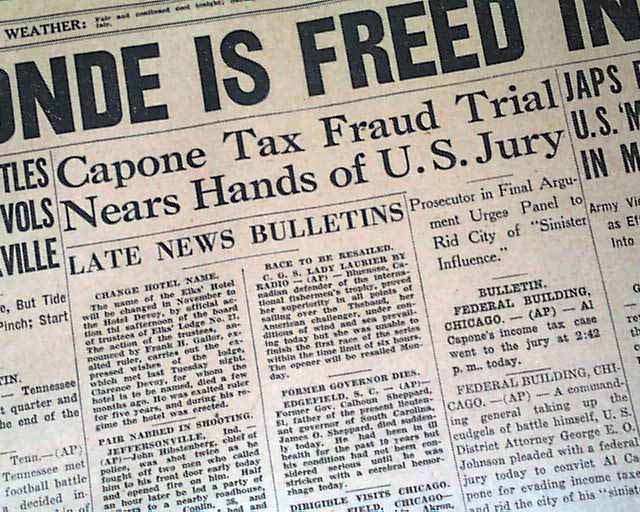 This 12 page newspaper has a nice three column headline on the front page: "Capone Tax Fraud Trial Nears Hands of U.S. Jury" with subhead (see photos). Nice to have this report on the front page.

Other news of the day including period advertising. Light browning with little margin wear and chipping, irregular at the spine, otherwise in good condition.

wikipedia notes: In 1931 Capone was indicted for income tax evasion and various violations of the Volstead Act. Facing overwhelming evidence, his attorneys made a plea deal, but the presiding judge warned he might not follow the sentencing recommendation from the prosecution, so Capone withdrew his plea of guilty. Attempting to bribe and intimidate the potential jurors, his plan was discovered by Ness's men. The venire (jury pool) was then switched with one from another case, and Capone was stymied. Following a long trial, he was found guilty on some income tax evasion counts (the Volstead Act violations were dropped). The judge gave him an eleven-year sentence along with heavy fines, and liens were filed against his various properties. His appeal was denied.