Home > Back to Search Results > The death of actor John Barrymore...
Click image to enlarge 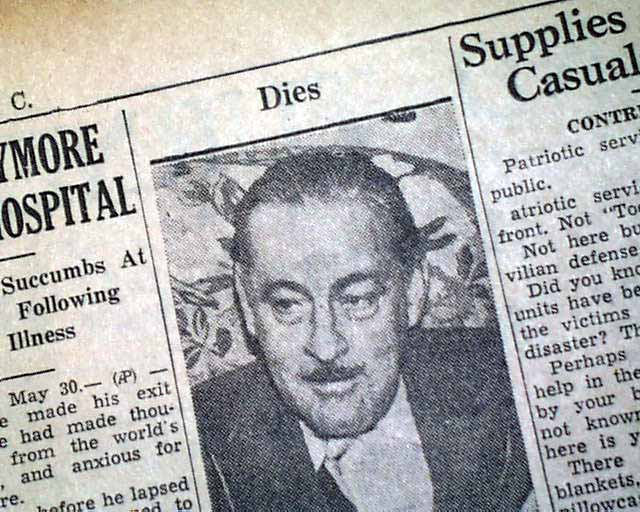 The death of actor John Barrymore...

This 20 page newspaper has one column headlines on page 7: "JOHN BARRYMORE DIES IN HOSPITAL" and "Famous Actor Succumbs At Age Of 60 Following 11-Day Illness" with a photo of Barrymore (see photos).

Other news of the day. Light browning with little margin wear and chipping, otherwise good.

wikipedia notes: John Sidney Blyth Barrymore (February 15, 1882 – May 29, 1942) was an American actor. He first gained fame as a stage actor in light comedy, then high drama and culminating in groundbreaking portrayals in Shakespearean plays Hamlet and Richard III. His success continued with motion pictures in various genres in both the silent and sound eras. Barrymore's personal life has been the subject of much writing before and since his passing in 1942. Today John Barrymore is mostly known for his roles in movies like Grand Hotel (1932), Dinner at Eight (1933), Twentieth Century (1934), and Don Juan (1926), the first ever movie to use a Vitaphone soundtrack.

A member of a multi-generation theatrical dynasty, he was the brother of Lionel Barrymore and Ethel Barrymore, and was the paternal grandfather of Drew Barrymore.

Barrymore collapsed while appearing on Rudy Vallee's radio show and died some days later in his hospital room. His dying words were "Die? I should say not, dear fellow. No Barrymore would allow such a conventional thing to happen to him." Gene Fowler attributes different dying words to Barrymore in his biography Good Night, Sweet Prince. According to Fowler, John Barrymore roused as if to say something to his brother Lionel; Lionel asked him to repeat himself, and he simply replied, "You heard me, Mike."

According to Errol Flynn's memoirs, film director Raoul Walsh "borrowed" Barrymore's body before burial, and left his corpse propped in a chair for a drunken Flynn to discover when he returned home from The Cock and Bull Bar. This was re-created in the movie W.C. Fields and Me. Other accounts of this classic Hollywood tale substitute actor Peter Lorre in the place of Walsh, but Walsh himself tells the story in Richard Schickel's 1973 documentary The Men Who Made the Movies. However, Barrymore's great friend Gene Fowler denied the story, stating that he and his son held vigil over the body at the funeral home until the funeral and burial.