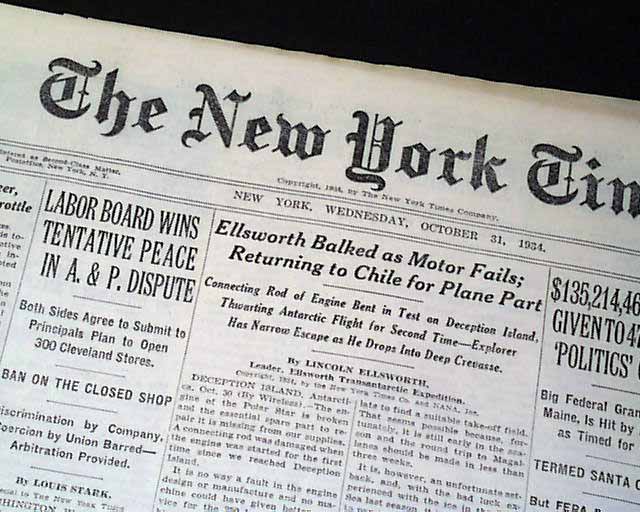 This 40 page newspaper has a small one column heading on page 2:
"Rocket Transports Mail In a Test Near Trieste" which tells of Gerhard Zucker experimenting with rocket mail. See photo for brief text here.

Other news of the day throughout including period advertising. This rag edition has minor spine wear, but is otherwise in great condition.

wikipedia notes: Gerhard Zucker (1908 – 1985) was a German businessman and rocket engineer. However, none of his machinations proved to be operational, ranging from outright fraud to total failure.

Born in Hasselfelde, he first came to public notice in 1931, when he began to work on the problem of transporting mail by rocket. In 1933 he performed several experiments in the Harz and at Cuxhaven. In 1934, he emigrated to the UK, where he attempted to interest the British government in his rocket.

After a failed rocket demonstration for officials of the British Royal Mail on July 31, 1934, he was deported to Germany, where he was arrested on suspicion of cooperating with the British. During World War II he served in the Luftwaffe.

After World War II, he moved across the border to West Germany, to the part of the Harz in Lower Saxony, where he became a furniture dealer. He continued his rocket experiments until, at a rocket demonstration on May 7, 1964 on the Hasselkopf Mountain near Braunlage, an accident occurred which killed three people. This accident led to a ban on civilian rocket research in West Germany, ending the rocket experiments of the Hermann-Oberth-Gesellschaft (Hermann Oberth Society) and the Berthold Seliger Forschungs- und Entwicklungsgesellschaft mbH (Berhold Seliger Research and Development Society).

A movie based on Zucker's attempts with mail rockets at Scarp was made 2004, called The Rocket Post, starring Ulrich Thomsen as Zucker.