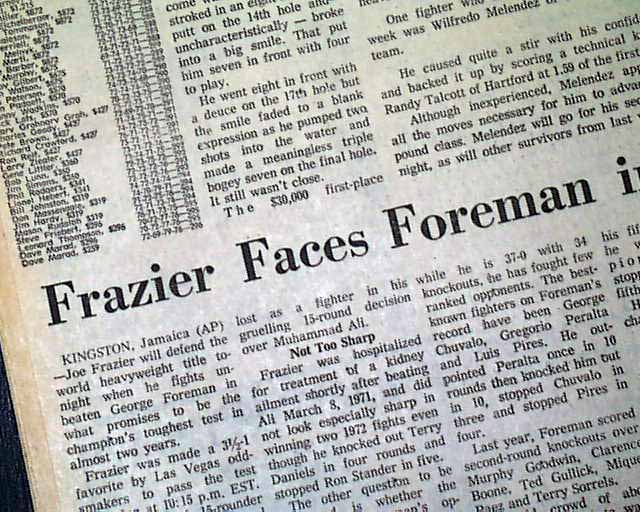 This 28 page newspaper has a seven column headline near the bottom of page 14 that reads: "Frazier Faces Foreman in Tough Title Test Tonight".

The front page also has some coverage of the Inauguration events of President Richard Nixon (second term).

wikipedia notes: In 1972, Frazier successfully defended the title twice, beating Terry Daniels and Ron Stander, both by knockout, in the fourth and fifth rounds respectively.

It was Frazier's turn to lose his undefeated record of 29-0 and position as undisputed world champion at the hands of powerful puncher George Foreman on January 22, 1973, in Kingston, Jamaica. Foreman towered over the shorter, more compact Champ, and soon dominated the brief bout. The fight was stopped in the second round after Frazier was knocked down for the sixth time, three times in each round (the three knock-down rule was not in effect). The first of these knock-downs prompted Howard Cosell's famous call, "Down goes Frazier! Down goes Frazier! Down goes Frazier!"

After his loss to Foreman, now 38-0, Frazier won his next fight, a 12-round decision over Joe Bugner in London to begin his quest to regain the title.