Home > Back to Search Results > Hurricane Edna in 1954...
Click image to enlarge 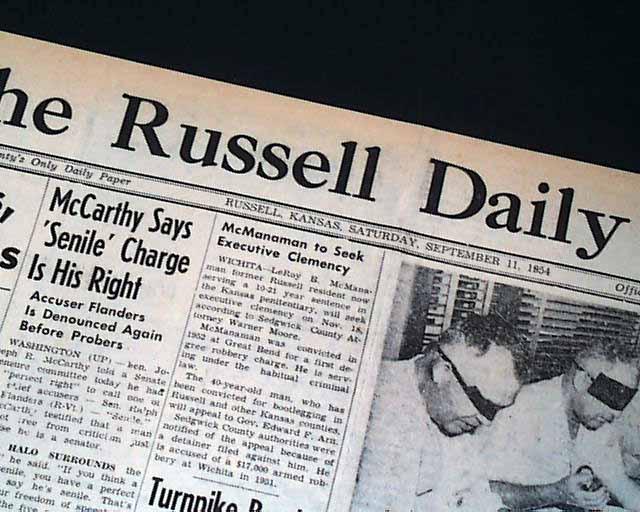 Other news of the day including various advertising. Complete in 6 pages, 17 by 22 1/2 inches, light browning with little spine wear, but otherwise in good condition.

wikipedia notes: Edna was one of Maine's worst hurricanes, yet this storm could have been much worse. Carol hit Long Island directly as a Category 2, while Edna hit a less densely populated part of New England and was weaker. As it was, Edna still killed 29 people and caused $40.5 million in damage. For the citizens of Maine, it was a painful reminder that they were not immune from the dangers of hurricanes. The state would have the occasional hurricane brush by in the years to come, but none of them (with the possible exception of Gerda in 1969) were as destructive as Edna.

Eight people died due to drowning in Maine. In Unity, a family of 10 was trapped on top of their car, cut off by raging flood waters. A human chain of rescuers managed to save 9 of them. One 8 year old girl was swept away as her father lost his grip on the child when a house smashed into the guard rail. A 47 year old man was also swept away as he was trying to rescue the family. In all, a total of 29 people died in the storm, 12 people in New England, and 8 of those were in Maine.