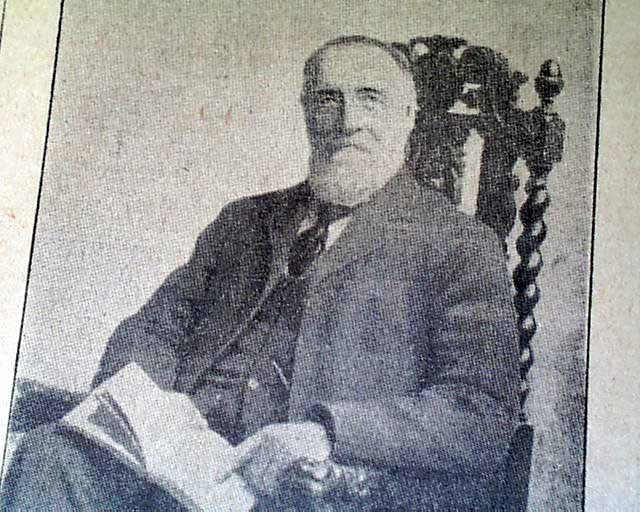 This 16 page newspaper has one column headings on page 7: "Was "Father Of Baseball" "Henry Chadwick, for Years an Authority on the Game, Dies at His Brooklyn Home" with nice photo of Chadwick. See photos for text here on the death of Henry Chadwick, known as the "father of baseball".

Other news of the day. Light browning with minor margin wear, otherwise good. Somewhat pulpish, should be handled with care.

Born in Exeter, England, and raised on cricket, Chadwick was one of the prime movers in the rise of baseball to its unprecedented popularity at the turn of the 20th century. Chadwick moved to Brooklyn with his family at the age of 12, and became a frequent player of early ball games such as rounders. He began covering cricket for numerous local newspapers such as the Long Island Star. It is said Chadwick first came across baseball in 1856 in New York as a young cricket reporter, while watching a match between New York's Eagle and Gotham clubs. In 1857 he focused his attention as a journalist and writer on baseball after joining the New York Clipper, and was also soon hired on to provide coverage for other New York papers including the Sunday Mecury.[1] A keen amateur statistician and professional writer, he helped sculpt the public perception of the game, as well as providing the basis for the records of team's and player's achievements in the form of baseball statistics.

Chadwick edited The Beadle Baseball Player, the first baseball guide on public sale, as well as the Spalding and Reach annual guides for a number of years and in this capacity promoted the game and influenced the then-infant discipline of sports journalism. He also served on baseball rules committees and influenced the game itself.

In his 1861 Beadle guide, he listed totals of games played, outs, runs, home runs, and strikeouts for hitters on prominent clubs, the first database of its kind. His goal was to come up with numerical evidence as that would prove what players helped or hurt a team to win.

In 1867 he accompanied the National Base Ball Club of Washington D.C. on their inaugural national tour, as their official scorer, and in 1874 was instrumental in organizing a similar tour of England, which included games of both baseball and cricket. In his role as journalist, he campaigned against the detrimental effects on the game of both alcohol and gambling.

Despite a friendship with Albert Spalding, Chadwick was scornful of the attempts to have Abner Doubleday declared the inventor of baseball. "He means well", said Chadwick, "but he don't know".
An early boxscore from 1876.

He is credited with devising the baseball box score (which he adapted from the cricket scorecard) for reporting game events. The first box score was a grid with nine rows for players and nine columns for innings. The original box scores also created the often puzzling abbreviation for strikeout as "K" - "K" being the last letter of "struck" in "struck out." The basic format and structure of the box score has changed little since the earliest of ones designed by Chadwick. He is also credited with devising such statistical measures as batting average and earned run average. Ironically, ERA originated not in the goal of measuring a pitcher's worth but to differentiate between runs caused by batting skill (hits) and lack of fielding skill (errors). He is also noted as believing fielding range to be a superior skill to avoiding errors.

The following description of a game was written by Henry Chadwick and appeared in his Base Ball Memoranda. It is typical of his style of sports journalism, and that of his time:

A Base Ball tourney had been held in Chicago on July 4, 1867, in which the Excelsiors of that city and the Forest City Club, of Rockford, had been the leading contestants. The former had defeated the Forest City nine in two games, by the very close scores of 45-41 in one, and 28-25 in another, when the Forest Citys were invited to meet the Nationals at Chicago on July 25th, a day which proved the most notable of the tour. The contest took place at Dexter Park, before a vast crowd of spectators, the majority of whom looked to see the Nationals have almost a walk-over. In the game A. G. Spalding was pitcher and Ross Barnes shortstop for the Forest City nine; these two afterwards becoming famous as star players of the Boston professional team of the early seventies. Williams was pitcher for the Nationals and Frank Norton catcher. The Nationals took the lead in the first innings by 3 to 2; but in the next two innings they added but five runs to their score, while the Forest Citys added thirteen to theirs, thereby taking the lead by a score of fifteen to eight, to the great surprise of the crowd and the delight of the Rockfords. The Nationals tried hard to recover the lost ground. The final result, however, was the success of the Forest Citys by a score of 29 to 23 in a nine innings game, twice interrupted by rain.

For his contributions to the game of Baseball, he was elected to the Baseball Hall of Fame by the Veterans Committee in 1938.

Chadwick was the younger half brother of Sir Edwin Chadwick, England's sanitary philosopher who developed environmental measures and laws designed to counteract the effects of the Industrial Revolution.

Chadwick died at age 83 in Brooklyn, New York and is interred in Green-Wood Cemetery in Brooklyn. "Father of Base Ball" is inscribed on his grave marker.