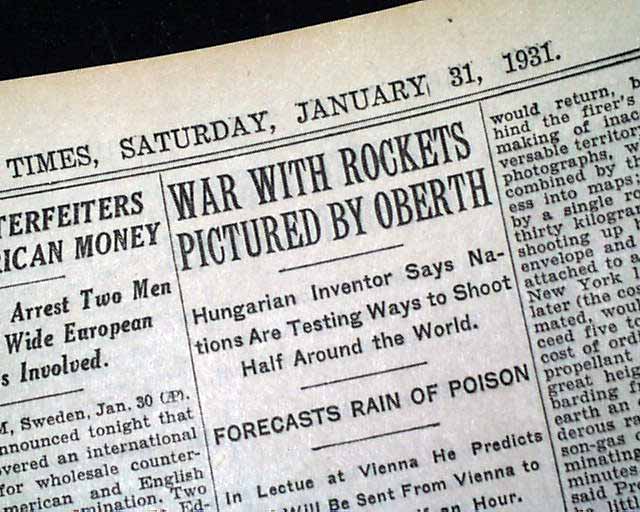 This 36 page newspaper has one column headlines on page 8 that include: "WAR WITH ROCKETS PICTURED BY OBERTH", "Hungarian Inventor Says Nations Are Testing Ways to Shoot Half Around the World", "Forecasts Rain Of Poison" and more. Interesting text here which takes up about a 1/2 column. Notice he suggests chemical warfare here (see images).

Other news of the day, sports, and advertising throughout. Little spine wear, otherwise good condition.

source: wikipedia: Hermann Julius Oberth (25 June 1894 – 28 December 1989) was a Transylvania-born German-Hungarian physicist and engineer of Saxon (mostly) ancestry, who along with the Russian Konstantin Tsiolkovsky and the American Robert H. Goddard, was one of the founding fathers of rocketry and astronautics. The three never were active collaborators, and in fact, never knew one another: instead, their parallel achievements occurred independently of one another.