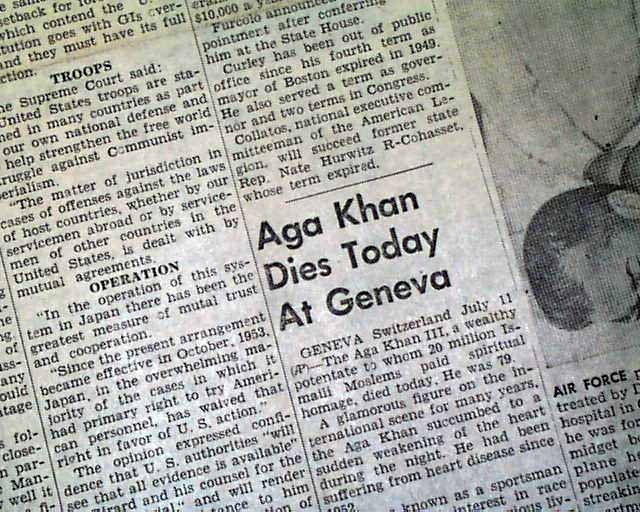 This 12 page newspaper has a one column headline on the front page:

Tells of the death of Sultan Mahommed Shah. See photos for text here.

wikipedia notes: Sultan Mahommed Shah, Aga Khan III, (November 2, 1877 – July 11, 1957) was the 48th Imam of the Shia Ismaili Muslims. He was one of the founders and the first president of the All-India Muslim League, and served as President of the League of Nations from 1937-38.

Aga Khan III was succeeded as 'Aga Khan' by his grandson Karim Aga Khan, who is the present Imam of the Ismaili Muslims. At the time of his death on July 11, 1957, his family members were in Versoix. A solicitor brought the will of the Aga Khan III from London to Geneva and read it before the family:

"Ever since the time of my ancestor Ali, the first Imam, that is to say over a period of thirteen hundred years, it has always been the tradition of our family that each Imam chooses his successor at his absolute and unfettered discretion from amongst any of his descendants, whether they be sons or remote male issue and in these circumstances and in view of the fundamentally altered conditions in the world in very recent years due to the great changes which have taken place including the discoveries of atomic science, I am convinced that it is in the best interest of the Shia Muslim Ismailia Community that I should be succeeded by a young man who has been brought up and developed during recent years and in the midst of the new age and who brings a new outlook on life to his office as Imam. For these reasons, I appoint my grandson Karim, the son of my own son, Aly Salomone Khan to succeed to the title of Aga Khan and to the Imam and Pir of all Shia Ismailian followers."

He is buried in Aswan, Egypt at the Mausoleum of Aga Khan.