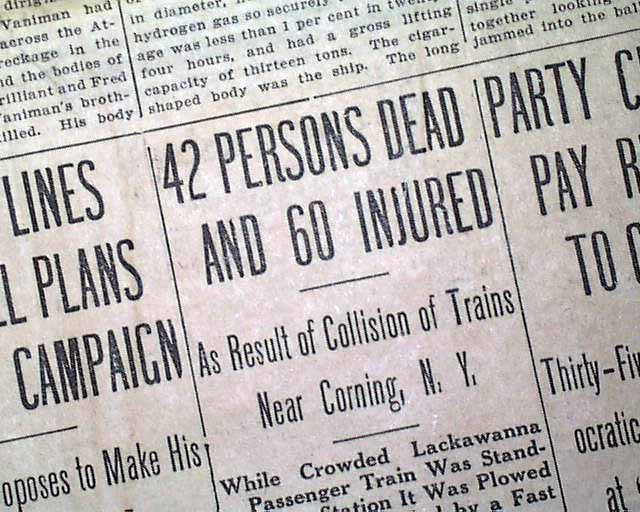 This 14 page newspaper has one column headlines on the front page that include: "42 PERSONS DEAD AND 60 INJURED", "As Result of Collision of Trains Near Corning, N. Y." and more.  Early reporting on the Corning train wreck in New York.

Other news, sports and advertisements of the day. Light browning with some margin wear with small piece torn off the top right corner (unrelated), otherwise good.

wikipedia notes: The Corning train wreck (also known as the Gibson train wreck) was a railway accident that occurred at 5.21 a.m. on July 4, 1912 on the Delaware, Lackawanna and Western Railroad at East Corning freight station in Gibson three miles east of Corning in New York State leaving 39 dead and 88 injured.

At 3.50 a.m. freight train No.393 left Elmira with 55 loaded cars; it experienced steaming problems and at 4.46 a.m. pulled into a siding at East Corning freight station to investigate. As it was doing so a coupling broke, leaving several cars on the main line. The line operated Automatic Block Signals; the presence of a train in the block section automatically setting the preceding semaphore signals; the first to caution, the next to danger. In addition as it was foggy the flagman placed two torpedoes on the line to protect the rear of the train[2].

Passenger train No.9 running from Hoboken, New Jersey to Buffalo and Niagara Falls left Elmira at 4.47; it consisted of ten cars hauled by two locomotives. It heeded the signals and came to a halt behind the disabled freight train. The engineer of No.9 decided to assist the freight train and the head locomotive was uncoupled to push the loose cars ahead onto the siding[1].

Meanwhile train No.11, an eight car mail express pulled by a Wootten-type engine, also travelling from Hoboken to Buffalo, departed Elmira at 5.00 a.m. For some reason the engineer, William Schroeder ignored two signals, one at caution and one at danger and plowed into the back of No.9 at a speed of 60 mph. The rear coach of No.9 was 'completely destroyed', the next one being of steel construction was less damaged only the 'vestibules and platforms on both ends were crushed', however it was 'stripped off its trucks and telescoped the third (wooden) car from the end through two-thirds of its length[2]. All but two of the mail express cars were derailed and whiplashed, bringing down the telegraph poles on both sides of the track; meaning it was an hour before news of the disaster reached Corning. Meanwhile hordes of spectators gathered hampering subsequent access by medical and rescue teams. A special relief train arrived from Elvira at 7 a.m. carrying doctors and nurses, but by 9 a.m. injured were still trapped in the wreckage