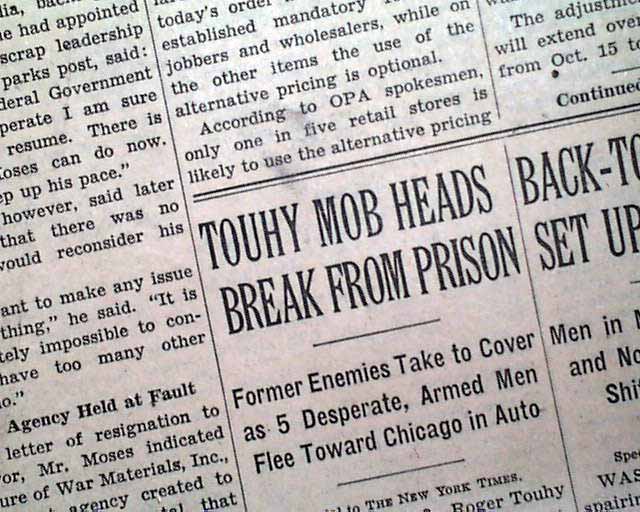 This 30 page newspaper has one column headlines on the front page:  "TOUHY MOB HEADS BREAK FROM PRISON", "Former Enemies Take to Cover as 5 Desperate, Armed Men Flee Toward Chicago in Auto" which tells of Chicago gangster Roger Touhy.

Other news of the day throughout including various advertisements. Minor margin wear, but otherwise in good condition.

wikipedia notes: Roger Touhy (1898–December 16, 1959) was an Irish-American mob boss and prohibition-era bootlegger from Chicago, Illinois. He is best remembered for having being framed for the 1933 faked kidnapping of gangster John "Jake the Barber" Factor, a brother of cosmetics manufacturer Max Factor, Sr. Despite numerous appeals and at least one court ruling freeing him, Touhy spent the next 26 years locked in a prison cell. Touhy was not released until November 1959. He was murdered by the Chicago Outfit less than one month later.

On October 9, 1942, Touhy and six other men escaped from Stateville prison. After a month, Touhy and the others were discovered living in a Chicago boarding house. Touhy and three others surrendered peacefully. The remaining two escapees tried to fight their way out and were killed. Touhy re-entered Stateville on December 31, 1942, and was sentenced to an additional 199 years in prison for the escape.