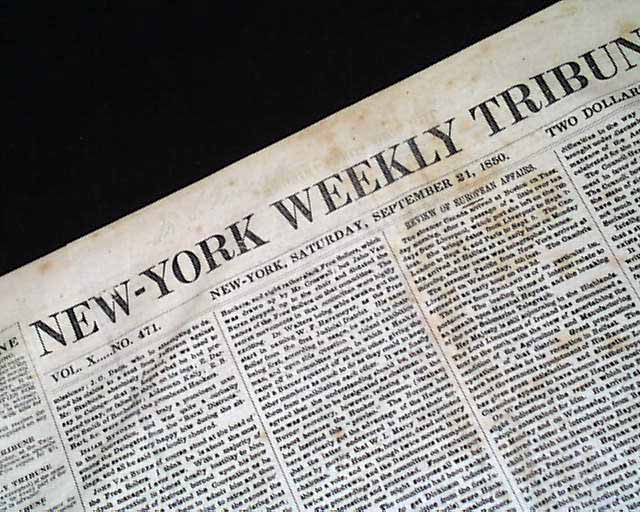 The front page has: "Another Jenny Lind Song" (see)

Also on page 4 is: "Jenny Lind, Her Second and Third Concerts" which tells of Jenny Lind's famous visit to America which was set up by Phineas T. Barnum. This takes up almost 2 full columns.

wikipedia notes: By 1849, when Jenny Lind was in the midst of her third triumphant London season, P. T. Barnum had become aware of her success and the large audiences she attracted. Earlier in 1845 and 1846 Barnum had toured Europe with his first great attraction, General Tom Thumb. Although he had never heard Lind sing, Barnum knew that concert halls sold out wherever she sang and that she was known for her virtue and charity as well as for her voice. In October 1849, Barnum hired an Englishman, John Wilton, to locate Lind and make her an offer.

Lind wanted to fund new schools in Sweden, and Barnum's offer would allow her to earn a great deal of money. After checking Barnum's credit with a London bank, on 9 January 1850, Lind accepted Barnum's offer of $1,000 a night (plus expenses) for up to 150 concerts in the United States. Lind insisted on the services of Julius Benedict, a German conductor, composer and pianist with whom she had worked in England, and of Italian baritone Giovanni Belletti as assisting artist, since solo recitals were still unknown to American audiences. Benedict's fee was $25,000 and Belletti's $12,500. All told, Barnum had committed to $187,500 (plus expenses) to bring Lind and her musical troupe to America.

Lind's contract called for the total fee to be deposited in advance with the London banking house of Baring Brothers. Barnum had not anticipated front-end payments for Lind, since he always had paid performers as performances were completed. To raise the money, Barnum sought loans from New York bankers, who refused to make the loans based on a percentage of the Lind tour, so Barnum mortgaged all his commercial and residential properties. Still a bit short, Barnum finally persuaded a Philadelphia minister, who thought that Lind would be a good influence on American morals, to lend him the final $5,000. Barnum sent the $187,500 to London.

Few Americans had ever heard of Lind, and Barnum's first press release set the tone of the promotion. "A visit from such a woman who regards her artistic powers as a gift from Heaven and who helps the afflicted and distressed will be a blessing to America." Her biographical pamphlet and photograph proclaimed: "It is her intrinsic worth of heart and delicacy of mind that produces Jenny's vocal potency." Barnum heavily promoted her record of giving frequent benefit concerts for hospitals and orphanages. Before Lind had even left England, Barnum had made her a household name in America. In August 1850, before Lind left England, Barnum arranged for her to give two farewell concerts in Liverpool. A critic engaged by Barnum to cover the concert wrote of the enthusiasm of the Liverpool audience and its grief at Lind's imminent departure. This review was widely circulated in English, European and American newspapers a week before Lind arrived in New York on 1 September 1850. Over 40,000 people greeted her arrival, trying to get a glimpse of the star.

Barnum and Lind renegotiated their contract on 3 September 1850, giving Lind the original $1,000 per concert agreed to, plus the remainder of each concert's profits after Barnum's $5,500 concert management fee was paid. Lind was represented by her lawyer John Jay. Lind gave 93 concerts in America for Barnum, earning over $250,000, while Barnum netted at least $500,000. Lind gave the majority of her U.S. concert earnings to charities, including $1,000 to help build a church in Chicago, and $1,500 to help build the "mother church" of the Lutheran 'Augustana Synod' in Andover, Illinois.