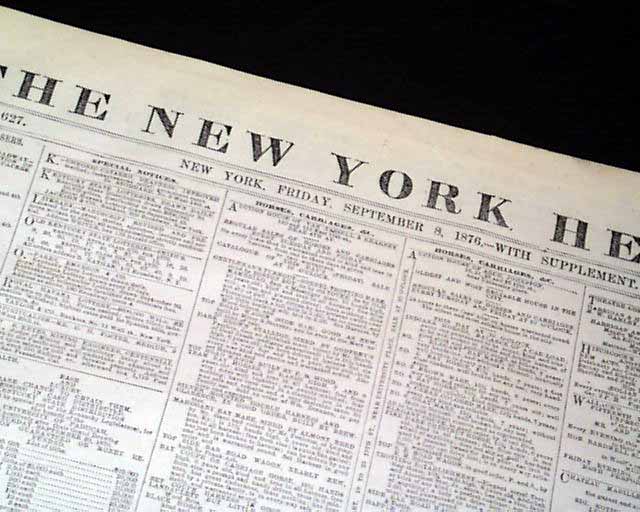 Page 3 has:  "P. R.", "Fight for the Championship of the World", "Goss Beats Allen on a Foul", "Twenty-One Rounds Fought in 1h. 52m.", "Pistol Firing and Stabbing During the Fight--Roughs Reported Killed" and more (see photos). Lengthy text takes over 3 full columns. A great report on early boxing back when it was still bare knuckle fighting. See photos for portion of the reporting.

Other news of the day throughout including various advertisements and much on the Sioux War of 1876. Complete in 10 pages with minor margin wear but otherwise in good condition.

wikipedia notes: Joe Goss was born on 5 November 1838 in Northampton, England. Although he rarely scaled more than 160 pounds, the clever and aggressive Goss routinely fought men both bigger and heavier than himself.

At the age of twenty, Goss began his career with a 90-minute victory over George Hares. Goss would not lose a contest until Hall of Famer Jem Mace defeated him in 19 rounds (1 hour and 55 minutes) in London on 1 September 1863. Goss would unsuccessfully challenge his nemesis Mace on two other occasions, including an 1866 championship contest.

In 1876 Goss would claim the world's heavyweight title after defeating Tom Allen on a foul in 21 rounds.