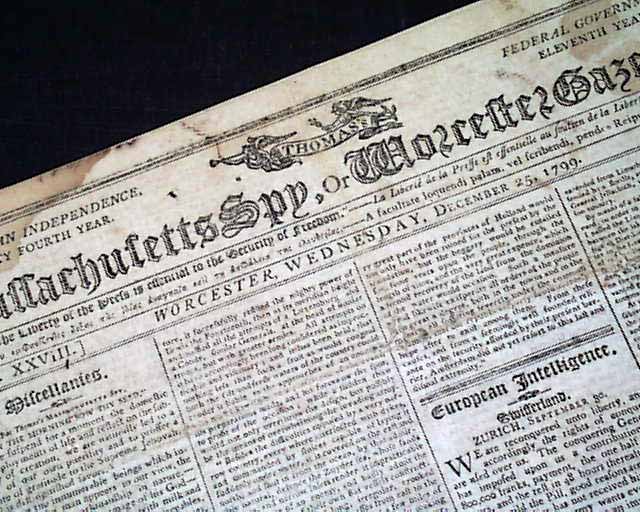 Reports on the death of Washington remain among the more desired, and scarce, newspapers of the post-Revolutionary War era. Rarely have we been able to offer a first report: this is one. And with an early date, as some newspapers did not learn of Washington's death until close to, or in, January of 1800.
Page 3 has a report taking about three-quarters of a column with wide mourning rules above & below the text, headed: "Melancholy Postscript. DEATH of WASHINGTON ! " with the report from a letter from a member of Congress beginning: "Our Nation Mourns--It has suffered a loss not to be repaired--General WASHINGTON is no more ! ..." with such further details, including: "...Dr. Craik was sent for & found him extremely ill of a disorder which the physicians call the Croup...all in vain--after using every remedy they could advise, the General told them he was convinced he should die--that to him death had no terrors, he was prepared to meet it--He accordingly died about twelve o'clock the same night, not having been ill more than 24 hours..." (see). Further on in this report is a letter from Boston which begins: "It is our afflicting task this day to communicate the distressing information of the death of General GEORGE WASHINGTON. The truth of this melancholy event appears beyond controversy..." with more (see). And there is also a similar report from New York (see).
Curiously, page 2 has a nice report on the progress of construction of the federal buildings in Washington, D.C. under the heading: "Washington City" with comments by Mr. Hoban on the situation with the "President's House" and the "Capitol" and the "Senate Chamber" and the "Representatives Chamber" and the "Treasury Office" and the "War Office" (see).
Four pages, very nice, clean condition. One vertical crease which does not affect the mentioned article.
Four pages, a bit irregular at the spine, a few small, discrete archival mends, some rubbing to an upper fold which causes a few small holes affecting just one word in the Washington report, partially rejoined at the spine.
An extremely significant & historic issue for the best of collections.