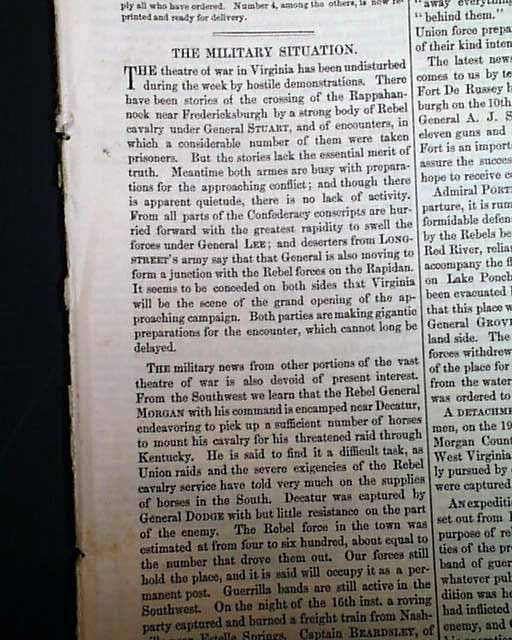 
ARMY & NAVY JOURNAL,  New York, March 26, 1864  As noted in the masthead this was the: "Gazette of The Regular & Volunteer Forces" and as such is replete with military news of all sorts. The entire front page is taken up with: "The Military Situation" giving reports from various fields of operation, carrying over to take all of pg. 2.
Other items in this issue include: "The Grog Ration" "List of Prizes" takes half a page listing captures by the U.S. Navy (see for portions), "Army & Navy Personal" "General Grant & the Army of the Potomac" "Lieut. Gen. Grant Assumes Command" which includes the official order of the President, signed: Abraham Lincoln, plus Grant's response signed: U.S. Grant, Lieutenant-General (see images). Also a lengthy list of: "Appointments by the President" which takes close to two pages.
Complete in 24 pages, 10 by 14 1/2 inches, nice eagle in the masthead, nice condition.