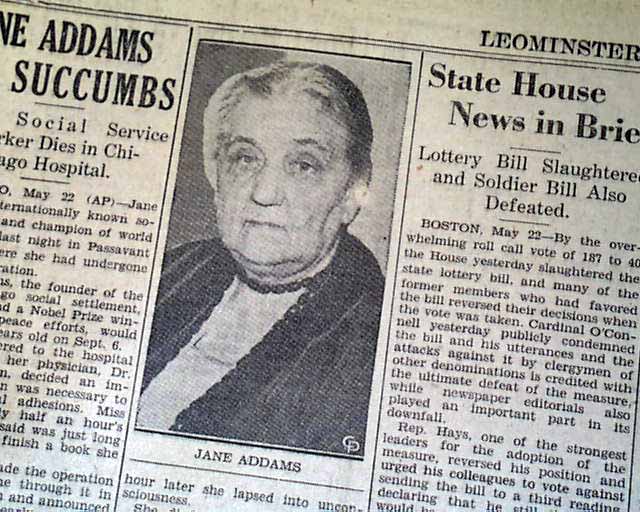 wikipedia notes: Born in Cedarville, Illinois, Jane Addams was the youngest of six children born into a prosperous, loving family. Although she was the eighth child, two of her siblings died in infancy, leaving only six to mature. Her mother, Sarah Addams (née Weber), died from tuberculosis during pregnancy when Jane was two years old.

Jane's father, John H. Addams, was the President of The Second National Bank of Freeport, an Illinois State Senator from 1854 to 1870, and owner of the local grain mill. He remarried when Jane was eight. Her father also was a founding member of the Republican Party and supported Abraham Lincoln. Jane was a first cousin twice removed to Charles Addams, noted cartoonist for The New Yorker.[ She was born with Pott's disease, which caused a curvature of her spine and lifelong health problems.

Addams's father encouraged her to pursue a higher education, but not at the expense of losing her femininity and the prospect of marriage and motherhood, as expected of upper class young women. She was educated in the United States and Europe, graduating from the Rockford Female Seminary (now Rockford College) in Rockford, Illinois. After Rockford, she spent seven months at the Women's Medical College of Philadelphia, but dropped out. Her parents felt that she should not forget the common path of upper class young women. After her father's sudden death, Addams inherited $50,000.

In 1885, she set off for a two-year tour of Europe with her stepmother. Upon her return home, she felt bored and restless, indifferent about marriage, and wanting more than just the conventional life expected of well-to-do ladies. After painful spinal surgery, she returned to Europe for a second tour in 1887, this time with her best friend Ellen Starr and a teacher friend. During her second tour, Addams visited London's Toynbee Hall, which was a settlement house for boys based on the new philosophy of charity. Toynbee Hall was Addams's main inspiration for Hull House.

Throughout her life Addams was close to many women and was very good at eliciting the involvement of women from different classes in Hull House's programs. Her closest adult companion and friend was Mary Rozet Smith, who supported Addams's work at Hull House, and with whom she shared a romantic friendship. Together they owned a summer house in Bar Harbor, Maine.

According to one biographer Addams was raised as a Quaker but joined a Presbyterian church in Chicago and maintained her membership there as an adult.