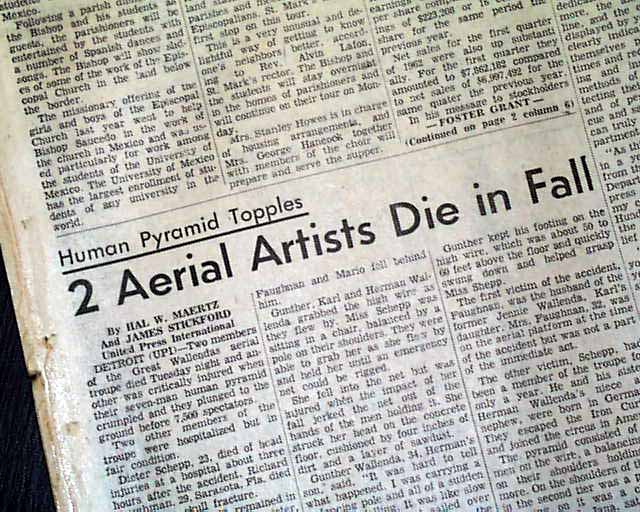 This 20 page newspaper has a three column headline on the front page: "2 Aerial Artists Die in Fall" with caption: "Human Pyramid Topples"

wikipedia notes: The Flying Wallendas is the name of a circus act and daredevil stunt performers, most known for performing highwire acts without a safety net. They were first known as The Great Wallendas, but the current name was coined by the press in the 40s and has stayed since. The name in their native German, "Die fliegenden Wallenda", is an obvious rhyme on the title of the Wagner opera, "Der fliegende Holländer" ("The Flying Dutchman").

Karl Wallenda was born in Magdeburg, Germany in 1905 to an old circus family, and began performing at the age of 6. While still in his teens he answered an ad for a hand balancer with courage. His employer, Louis Weitzman, taught him the trade. In 1922, Karl put together his own act with his brother Herman, Joseph Geiger, and a teenage girl, Helen Kreis, who eventually became his wife.

The act toured Europe for several years, performing some amazing stunts. When John Ringling saw them perform in Cuba, he quickly hired them to perform at the Ringling Brothers and Barnum and Bailey Circus. In 1928, they debuted at the Madison Square Garden. The act performed without a net (it had been lost in transit) and the crowd gave them a standing ovation.

It was at a performance in Akron, Ohio that the group all fell off the wire, but were unhurt. The next day, a reporter who witnessed the accident was quoted in the newspaper: "The Wallendas fell so gracefully that it seemed as if they were flying" -- thus coining the name of The Flying Wallendas.

In 1944, while performing in Hartford, Connecticut, a fire started that ended up killing over 168 people (see Hartford Circus Fire). None of the Wallendas were hurt.

In the following years, Karl developed some of the most amazing acts like the seven-person chair pyramid. They continued performing those acts until 1962. That year, while performing at the Shrine Circus at Detroit's State Fair Coliseum, the front man on the wire faltered and the pyramid collapsed. Three men fell to the ground, killing two of them (Richard Faughnan, Wallenda's son-in-law, and nephew Dieter Schepp). Karl injured his pelvis, and his adopted son, Mario, was paralyzed from the waist down.